While he was governor, Rick Scott turned down $70 million in federal funds to fight the AIDS epidemic in Florida 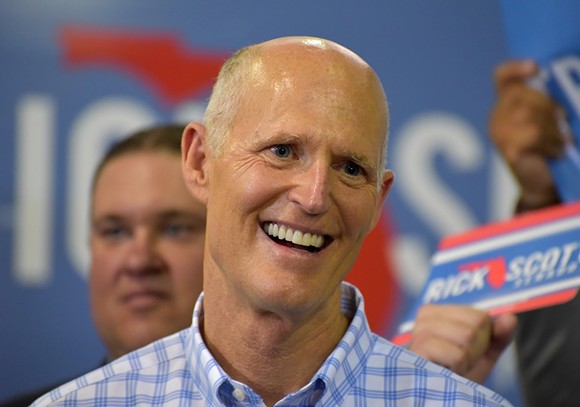 In the report, Florida's HIV/AIDS administrator from 2014 to 2016 under Scott, Marlene LaLota, is quoted saying, "I think Rick Scott fueled the epidemic in Florida."

The report found that from 2015 to 2017, "Florida was forced to return to the federal government $54 million in unspent grants for combating HIV." This was due to an apparently deliberate failure under Scott to get legislative permission to spend the funds. The administration forbade administrators from talking about the funds with legislators.

"Rick Scott had us all on lockdown," LaLota said in the report. "It didn’t used to be like that with previous governors."

In 2015, Scott’s administration also directly blocked two Centers for Disease Control and Prevention grant applications "that would probably have won Miami and Broward counties, which have HIV diagnosis rates among the highest in the U.S., approximately $16 million."

While the state of New York expanded both Medicaid and HIV funding and saw rates decrease by 30%, Florida experienced an increase of nearly 3% between 2010 and 2017. New York City applied for the same two grants and received $16.9 million.

The report blames the rigid, top-down management structure under Scott for concealing the actions until now.

“I wrote a plan to end the epidemic. But we were stopped at every turn. I could not give that money away to save my life. It was so criminal and so egregious,” said LaLota, a 28-year veteran of the Florida department. "How many infections could have been prevented with that money? How many lives could have been saved? Shame on them."

Blocking federal funds has long been a political point for Scott, who opposed the Affordable Care Act and refused millions in ACA grants. He rejected $2 billion for high-speed rail in 2011, instead backing the private company behind Brightline, now Virgin Trains.

Scott appears to have based his federal healthcare funding decisions around his campaign cycles. For example, he softened his opposition to Medicaid expansion in 2013, offering a three-year expansion trial ahead of the 2014 election, but it never happened.

"The state could only spend the money that it had the budget authority to spend," said a Scott spokeswoman in the report, essentially blaming the legislature.

The report, by Benjamin Ryan with additional reporting by Noah Pransky, is worth a read.