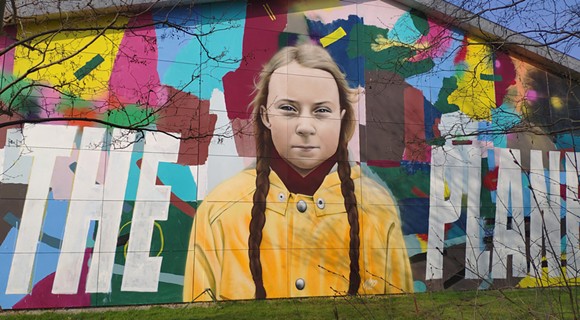 Update, Sept. 27 | The next Fridays for Future climate strike is planned for November. We'll keep you updated on the details in a new post.

Climate activists of all ages will gather at Orlando City Hall on Friday for what is billed as the first of many "Fridays for Future" protests, to call for immediate policy changes to address global climate change.

"As Floridians, we live in the state that will bear the biggest effects of the climate crisis," says the group's Facebook event. "Yet, despite this, our leaders refuse to act."

The event agenda includes striking in front of Orlando City Hall from 1 to 1:30 p.m., then speakers on climate action will address the crowd from 1:30 until 2 p.m. Democratic state Rep. Anna Eskamani of Orlando will be one of the speakers.

The strike will continue after the speakers, when the gathered will march to the northwest corner of Lake Eola Park. Organizers say there will be music and food trucks at Eola. Marching, they note, is only permitted on the sidewalks. The Eola gathering is scheduled to continue until 5 p.m.

Organizers include Orlando-based nonprofit IDEAS for Us, the Sunrise Movement Orlando, Fridays For Future USA ,and Fleet Farming. They are encouraging attendees to bring a homemade sign on recycled material "regarding climate action you would like to see in Florida," and to wear green. They plan to have 50 signs available, as well.

Interested in helping out our team? During the next two weeks we will be posting flyers throughout Orlando to encourage people to come out to the demonstration. If you want to help, visit and RSVP to the event of FB, invite your friends, and print off some flyers to post at any coffee shops, grocery stores, gyms, apartment complexes, or anywhere you can think of! Message us for more details! #OrlandoClimateStrike

Fridays For Future is a movement started by 16-year-old Swedish climate activist Greta Thunberg, which has so far activated weekly student strikes in 150 different countries. Strikers say they are standing up to local leaders to demand action to mitigate climate change.

The Sept. 20 event is part of a Global Climate Strike that day, which "invites adults to join students in solidarity, amplifying their calls to action."

The group's event listing says "Florida should be leaders in renewable energy, zero waste initiatives, protecting vulnerable ecosystems, environmental justice, and respect of indigenous land and sovereignty," but that state and local leaders are falling short.

This Global Climate Strike is led by Strike With Us:, which posted the full demands sought by the movement. Supporters can sign the Change.org petition online. The Orlando group has about 79 indicated as going, and says that several local meet up groups are hosting events to get their members there. More information about the Fridays For Future Climate Strike in Orlando is available on their Facebook page.