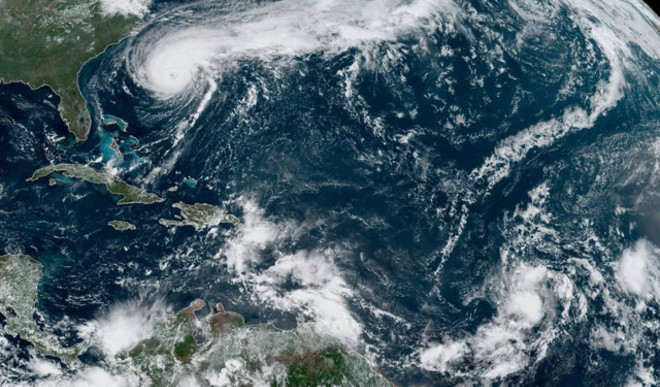 In their 11 a.m. advisory on Tuesday, forecasters with the National Hurricane Center say tropical depression 10 has now formed in the Atlantic and is expected to become a hurricane later this week.

“The NHC forecast calls for the depression to become a tropical storm later today, and attain hurricane status within 72 hours,” says the advisory.

The system is currently headed west toward the Lesser Antilles, and is expected to develop into a hurricane as it approaches the northern Windward Islands Thursday night.

If the system develops into a tropical storm later today, it will be called Imelda, and would be a threat to Puerto Rico and the Caribbean Islands. If hurricane status is then reached, Imelda would become the fourth hurricane so far this season.

“Regardless of development, this system is expected to produce locally heavy rainfall and possible flash flooding along portions of the central and upper Texas coastal areas later this week,” the NHC wrote.

Though Florida is not in any projected paths at the moment, the depression is forecast to remain north of the islands, with no longer range models showing a turn to avoid the U.S. coastline.

Meanwhile, just northwest of us, Hurricane Humberto is expected to become a "major" hurricane. It's now located about 525 miles west of Bermuda with maximum sustained winds of 100 mph, and is now a Category 2 storm, with no direct threat to the U.S.

Aircraft finds #Humberto a little stronger this morning.
The Bermuda Weather Service has issued a Tropical Storm Warning for Bermuda. Local information for Bermuda is available at: https://t.co/JRXVMmsO6u
Latest from NHC at: https://t.co/JX426wzDzx pic.twitter.com/mZH67cN9CA