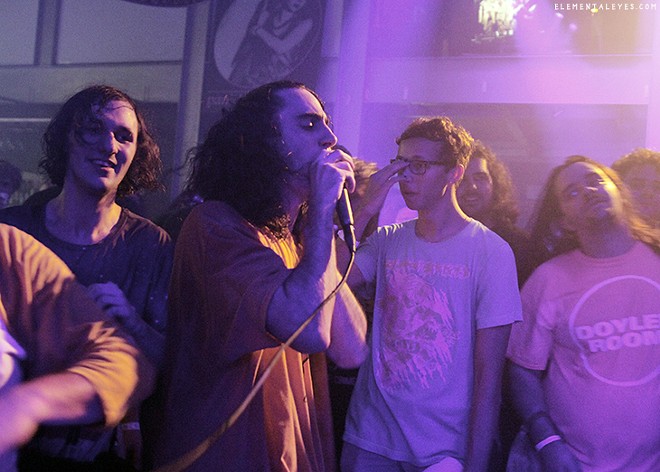 The street buzz for New York electro-punk act Machine Girl is hitting a fever pitch in Orlando. It’s not just the quantity they’re drawing, though packing out a show in the nightlife desert that is Sunday evening in Parramore is a heroic feat definitely worth noting. It’s also the quality of their crowd, who were a powder keg of anticipation and hype.

No warm-up was needed. This throng knew the deal. They were already locked and loaded by the time the band took the stage. And as soon as Machine Girl dropped in, the room went up like a match. Shit. Got. Sick.

It’s no wonder when music that’s as much hardcore punk as it is hardcore breakbeat comes via frenzied electronics, a live drummer and a singer who spends as much show time in the melee with the crowd as on stage.

While the sonic blitzkrieg rained down like a fast-forward waterfall, frontperson Matt Stephenson went full Monotonix, going from stage to floor to table, and at one point on top of the bar with ass completely bared.

With 360 degrees of physicality and thrill, their shows are the kind of concert experience that’s the stuff of legend. Electronic music now has its own Lightning Bolt, and its name is Machine Girl. And their cult here is surging hard.

Representing Orlando was local music figure and fringe fashion plate Jas000n, this time appearing live with Alien Witch’s Dee Crittenden on guitar. Jas000n’s electronic music rides a dark and stark frequency that’s as rooted in the alternative underground as it is in dance music. Under the murky, obscure hues throbs the pulse of deep house and other beat-based dance forms. It pumps with a hypnotic minimalism where starkness, sensuality and style converge.