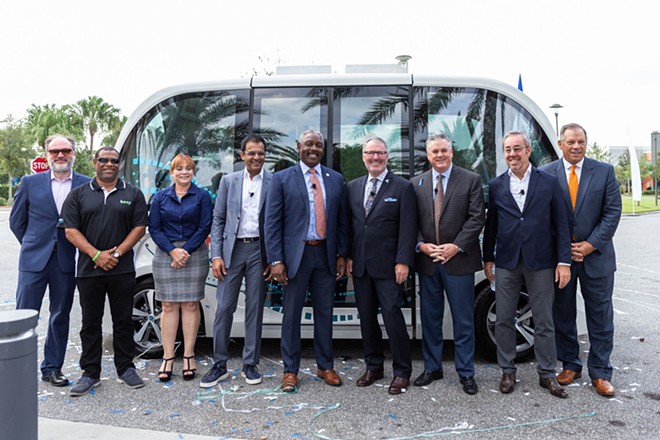 Check out this video from our writer Seth Kubersky of one of the buses pulling up to a stop sign, and imagine yourself driving behind it:

Did your head explode?

We first brought you news of the vehicles before Hurricane Dorian delayed the start of the new route, which runs between Lake Nona Town Center and Laureate Park Village Center. After driving behind them, some readers have already expressed doubt that the Beep-managed vehicles will ease traffic.

The shuttles hold up to 10 passengers each, who will likely awkwardly avoid eye contact while the bus chugs along silently "at a maximum speed of 12 to 15 mph." Here's how Beep CEO Joe Moye describes the initial speed, again from Seth Kubersky:
The trips will take place along busy Tavistock Lakes Blvd. from 10 a.m. to  2 p.m. and 6-10 p.m. daily, toward the end of morning and evening rush hours. As Lake Nonans know all too well, the community's two-lane streets can lead to traffic bottlenecks, especially while schoolbuses are on the roads. 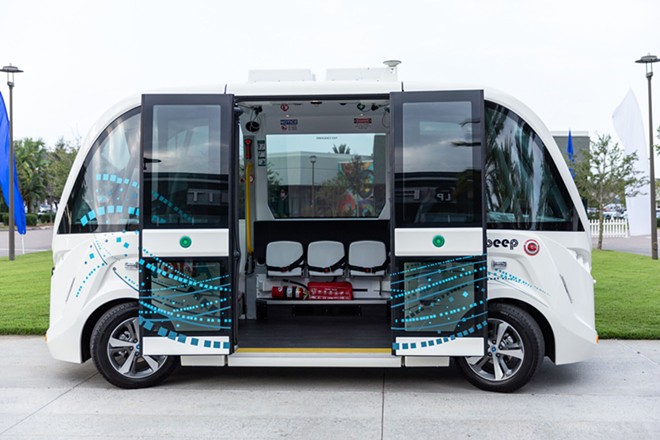 Fortunately, the 15 mph limit is not due to state law, but rather based on the terms of the pilot program, meaning the speed of the autonomous buses could increase after the initial trial period. The plan already is to increase the number of shuttles and expand the network of routes. 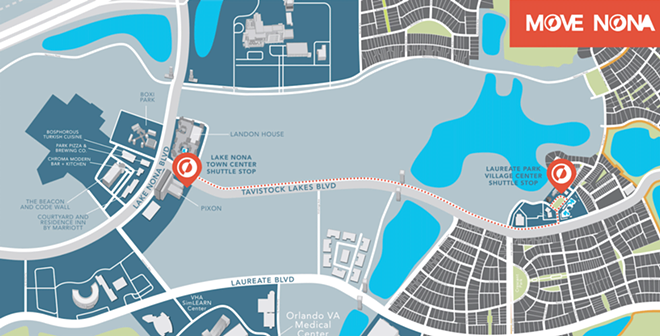 Orange County Mayor Jerry L. Demings was in attendance this morning and commented on the importance of the buses. "Bringing the first all-electric autonomous shuttles to Central Florida is a defining moment for the future of transportation in our region," said Demings. "In the U.S., they can be found in Arlington, Texas and Las Vegas, Nevada..."

We checked, and the buses in Arlington now travel at speeds up to 35 mph, and in Las Vegas up to 27 mph. That's good news for the human drivers of east Orange County.

If you find yourself behind one of the lethargic lifts, it's OK to yell a little. They can't hear you, but they will probably start speeding up a little soon.
Stay on top of Orlando news and views. Sign up for our weekly Headlines newsletter.