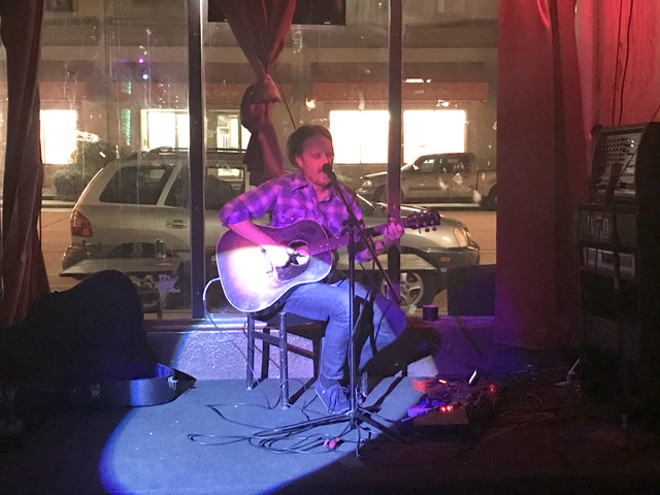 The Modern Music Movement – the Orlando promoter behind events like the Nashville South shows among others – has recently launched a new regular series called Opaque on Wednesdays at intimate Mills Ave. spot Grumpy’s Underground Eatery & Lounge. What distinguishes this one from others is its intersection of song and spoken word. No, not simultaneously, ya beatniks. You can leave your berets and finger snapping at home.

Rather, each edition spotlights one songwriter and one speak poet for an evening of cross-disciplinary art. The recent one was to pair notable local musician Wheeler Newman and Orlando wordsmith Dianne Richardson but the latter had to bail last minute due to family sickness. Disappointing though that was, this is a music column and not a spoken-word one so, as things stood, there was still a show to be had.

Normally, the speaker would open the night and the singer would close. This night, it was an exclusive engagement with Wheeler Newman, and it was an up-close and interesting look. It’s been ages since I’ve seen the Cosmic Roots Collective frontman perform solo, but in that time his picking skills have gotten pretty serious.

Moreover, the evening took on a breaking tenor when Newman announced he would be using the occasion to work out some new material, even playing some of it in public for the first time. The performance certified that he’s now pretty far from his more straightforward folk beginnings with an outward indie tendency that is decidedly post-folk. Almost like Thom Yorke taking things back to acoustic basics, Newman’s solo sound has become something less settled, more cutting and more reaching.

On typical Opaque editions, the sung and spoken performance duality would make for an even more dimensional experience. The midweek event is free and occurs in a fairly compact time frame (spoken word artist on at 9:30, musician at 10:00), ideal for both those looking for a good launchpad for the night or just a low-key but substantive evening for people with grown-ass schedules.