What Donald Trump has done is much, much worse—both what we know he’s done, and what’s been alleged over the last week, especially in the whistleblower complaint released Thursday.

As far as we can tell, no newspaper has demanded Trump’s resignation. So let the record show that INDY Week, the paper I edit, was the first. Today, our sister publication, Orlando Weekly, is joining us.

A little bit louder for the folks in the back: DONALD TRUMP NEEDS TO RESIGN.

The whistleblower’s account shows a White House that’s more Nixonian than Nixon, and an addled, conspiracy-minded president who is a legitimate threat to world stability. There is no other possible clear-eyed reading of the nine-page document. Trump’s defenders—both in the right-wing propaganda machines and in Congress—are either ignorant or they think their followers are.

The account discusses not just the phone call with the new Ukrainian president, in which Trump pressured Volodymyr Zelensky to dredge up a debunked investigation into his political rival while holding up hundreds of millions of dollars in military aid, but that this was part of a much longer-term effort within the administration to gin up something on Joe Biden, pre-dating Zelensky’s election.

In case you didn’t catch that, Lutsenko was alleging that Ukranian officials had colluded with the Democratic National Committee and the Obama administration to interfere in the 2016 election—which would run counter to Robert Mueller and the American intelligence community’s findings that the Russians interfered in an effort to help Donald Trump, but a conspiracy theory Trump has happily embraced.

Giuliani, the complaint goes on, met with Lutsenko in January and February. By April, Trump was calling his accusations “incredible.”

But Giuliani kept at it. 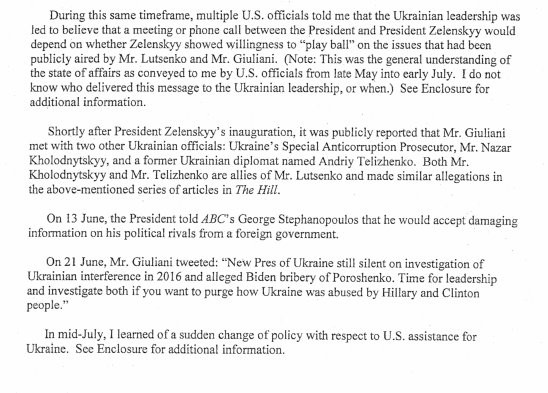 While all of this was going on, Trump told Vice President to ditch Zelensky’s inauguration in May, sending Secretary of Energy Rick Perry instead.

And then came the phone call.

Which the administration immediately tried to cover-up.

(Oh, and it wasn’t the first time this had happened.)

You don’t have to squint very hard to read between the lines here.

Rudy Giuliani pressured the former Ukranian administration to invent a Trumpian conspiracy theory and dig up dirt on his client’s leading opponent. When that administration fell, Trump began ratcheting up pressure on the next guy to “play ball,” holding over his head much-needed military assistance. When Trump said the quiet part out loud and too many people heard it, the administration tried to bury the evidence on a classified server.

Add that to everything we learned from the Mueller probe, everything we’ve seen from his three years in office—the incompetence, the cruelty, the corruption, the mendacity—and it all leads to only one conclusion: Every day Donald Trump spends in the White House discredits the office and shames the country.

In 1974, Richard Nixon wanted to weather the storm. A trio of Republican leaders, including Senator Barry Goldwater, went to the White House to convince him it was over—he’d lost his party, he’d lost Congress, he’d lost the country. He’d either resign or face the ignominy of being impeached and removed.

Nixon announced his resignation the next day.

The political dynamics are different today, of course—more polarized, each side operating from a different set of facts. In light of what’s come out, House Democrats are all but certain to impeach Trump. The question is whether Senate Republicans will continue to stand by their president to the bitter end, or will some of them have the courage to tell Donald Trump it’s over?

(Senator Burr, I’m looking at you.)