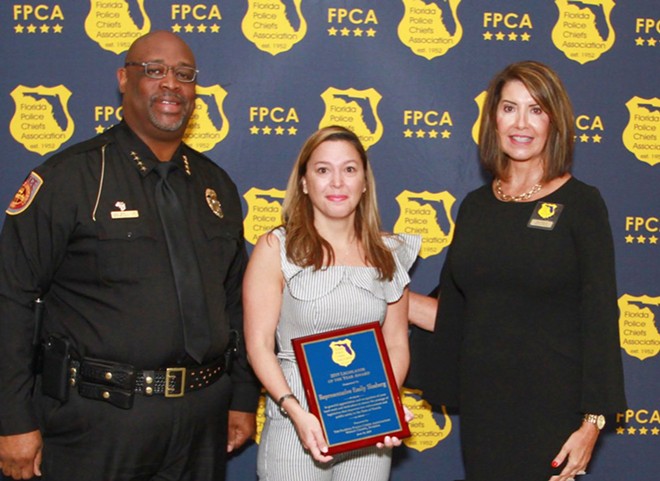 An author of a new law that toughened the state’s texting-while-driving ban wants to require motorists to go fully “hands-free” if they are using wireless phones.

Rep. Emily Slosberg, D-Boca Raton, filed a bill Monday for the 2020 legislative session that would make it illegal for people to operate vehicles while “manually holding or otherwise touching a wireless communications device.” The proposal (HB 249) was filed Monday, the day before a new law went into effect that prohibits motorists from using hand-held wireless devices in designated school crossings, school zones and work zones.

That change was part of a broader law that Slosberg helped pass during the 2019 session to strengthen the state’s ban on texting while driving. Part of the law went into effect on July 1 and made texting while driving a “primary” offense, which means police can pull over motorists for texting behind the wheel.

In the past, it was considered a “secondary” offense, which means motorists could only be cited for texting while driving if they were pulled over for other reasons. Since July 1, the Florida Highway Patrol has issued 463 warnings for texting and driving, while law enforcement statewide has issued 605 tickets.

The hands-free portion of the law started Tuesday, with officers directed to provide verbal or written warnings until the end of the year to motorists who don’t put down cell phones in school and work zones. Tickets will start to be issued Jan. 1, punishable as a moving violation with three points assessed against the driver’s license.

In a news release Monday, the Florida Department of Highway Safety and Motor Vehicles noted an effort is underway among state agencies, the Florida Sheriffs Association, the Florida Police Chiefs Association and AAA to ensure motorists are aware of the change.

Slosberg, whose twin sister died in a car accident, co-sponsored the texting-while-driving legislation during the 2019 session with Rep. Jackie Toledo, R-Tampa. The final version was deemed a compromise to win House support, as Sen. Wilton Simpson, a Trilby Republican who spearheaded the issue in the Senate, had proposed a hands-free requirement statewide. The 2020 legislative session will start Jan. 14.