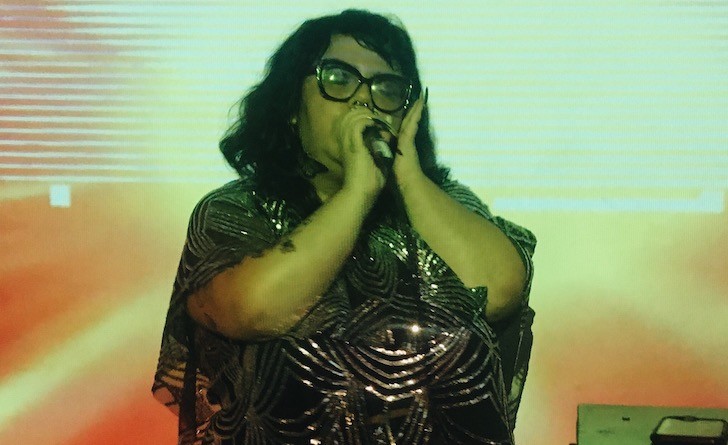 Local musician Ivy Hollivana has been taking the time-honored concept of "the hustle" to a whole new level over the last couple of months. Not only did she release her ambitious, full-length debut, Dear Deathwaters, but she then took that music all the way to Australia to play shows. We caught up with Hollivana after her return, where she graciously batted aside jetlag to answer our questions. As a final note, Hollivana just premiered her new music video "DATA:HEAL", which you can take a peek at after reading our conversation.

How did these Australian shows come about? This sounds like quite an adventure.
I have a lot of friends in Australia, and earlier this year I applied to perform at the Melbourne Fringe Festival. It was a vague idea at first - originally it was going to be me and Emily Glass doing a b2b for two hours. However, I found out about experimental-pop artist Katie Dey and hit her up for the opening act slot. The show was named DATA:HEAL, and the theme was about growing up online. This was a very special show, as I met all of my Australian friends online and we all had spent our childhoods pretty isolated on the internet. Completed with visuals from Levar Burzum and narrative by g0m, it came together beautifully and I could not be happier with the end result.

And how did the audience there respond to your music?
The audience response was super positive, at one point I did a call-and-response of "I LOVE TRANCE MUSIC" and everyone had a blast with that. Some people danced for the whole three hours which was impressive! There’s also nothing more amazing than people an ocean away yelling your lyrics at you. Every time I perform, I remember that this is what I'm meant to do, and I really felt the love back from the crowd that night.

The new album has been in the works for years now, tell me about some of the themes and tell me a little about your creative process?
Dear Deathwaters was a ride. I really pushed myself creatively and emotionally with it. There’s many themes in this album, it’s a bit of a roller coaster to be honest. There’s love, hate, death and mourning. For awhile I thought things were never going to be better after suffering loss after loss, but this album culminated my feelings and helped me through. It’s available on all major streaming platforms, but I would really recommend buying it from Bandcamp, as it supports me directly.


Are you already working on the follow-up album?
My next album is actually almost done! Right now I’m recording actual strings for this album because I craved the romantic sounds of a real violin. My sound is definitely more refined in this one.

What do you have planned now that you've returned to Orlando?
I'm debating taking a break from shows as I focus more on my album and creating more music and art. I never really know what I’m going to do though, to be honest. I might get into fashion design? I don't know. Anything creative makes me manic with desire and I'm trying to harness it and have some sort of focus.