An Orlando state representative is really stretching her sexual-health awareness dollars, as she prepares to hand out hundreds of personalized condoms at Saturday's Come Out With Pride festivities.

Orlando state Rep. Anna Eskamani today posted her latest swag to Twitter, along with her plans for this Saturday's Come Out With Pride event at Lake Eola Park.

"It's a fun way to talk about courageous discussions," she told Orlando Weekly. "As a lawmaker, it should be one of our responsibilities, to break the stigma around sexuality and health."

Eskamani says her team gets tested on occasions like National HIV/AIDS and Aging Awareness Day and Get Yourself Tested Month.

Eskamani says she used her own personal funds for the condoms, and designed them herself using an online vendor. They are not campaign collateral, but self-funded gifts to be given out from her legislative office table at Pride.

"We only ordered 250 of them. I paid for them out of my own pocket. I'm sensitive to using public dollars, so I did spend my own money on them," Eskamani said. "They're not for voting; it's focused on Pride, public health, and making sure we can have time talking about these often difficult subjects."

The subjects are certainly familiar to Eskamani, who was regional director of Planned Parenthood of Southwest and Central Florida for six years prior to running for office. She says her office is available for questions about medical and other resources from constituents.

"With very high HIV transmission rates, it means we need to address this crisis head on, and talk about complex sexual heath education topics, like easy access to the tools needed to make healthy decisions," said the first-term Democratic legislator. "I can't think of a better tool than free condoms to get the conversation started."

"It's really important to break the stigma around sexual health education. Our office phone number is on the inside tab, and folks can contact our legislative office."

We’re prepping for Orlando Pride this weekend, and will have some exciting swag to give away!

I mean, who doesn’t want a free condom with my face on it? 😜🔨 #OrlandoPride #SexEd #Condoms pic.twitter.com/jAYm3zUrxB 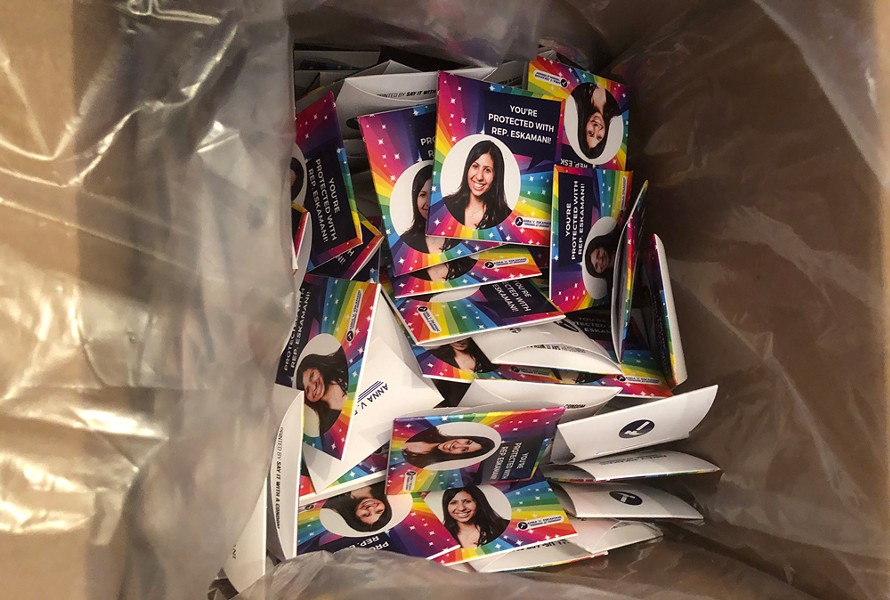