New Year’s Eve is one of the busiest days of the year at Walt Disney World, and the resort is constantly finding ways to ensure guests return. This year will see a number of brand-new events to compliment the usual in-park offerings.

For the first time in years, guests will be able to ring in the new year at Disney’s Animal Kingdom. The firework-free event will feature a unique countdown projected onto the Tree of Life. The park will also have winter-themed projections on the Tree throughout this winter.

The other three theme parks will have their typical New Year’s Eve offerings, but this will be the first time this millennium that the Epcot won’t be showing IllumiNations: Reflections of Earth ahead of the countdown. That nighttime show will close at the end of this month with a new, temporary "Epcot Forever" show, to begin in October and run until the new permanent show, "HarmoniUS," debuts next year. Epcot and Hollywood Studios will each have an exclusive up-charge dessert party, while the Magic Kingdom will host two dessert parties.

Thanks to two new rooftop dining venues, for the first time this year, there will be a collection of "Rooftop Celebrations" from which to choose.

Over at the soon-to-open Riviera Resort, Topolino’s Terrace – Flavors of the Riviera will offer a unique view of the fireworks at Epcot and Hollywood Studios at its Mezzanotte at Topolino’s: An Italian Masquerade. The party will feature food stations, alcoholic beverages, live Italian-inspired music, and a champagne toast. Disney notes that it will include a “Chilled seafood display extravaganza” and “European desserts.” Tickets are $550 per person.

The granddaddy of rooftop views is the Contemporary’s California Grill. For $675 per person, the party there includes a magician, portrait artist, and what Disney describes as "a host of eccentric personalities." Mickey, Minnie, Donald, and Goofy will join the festivities. 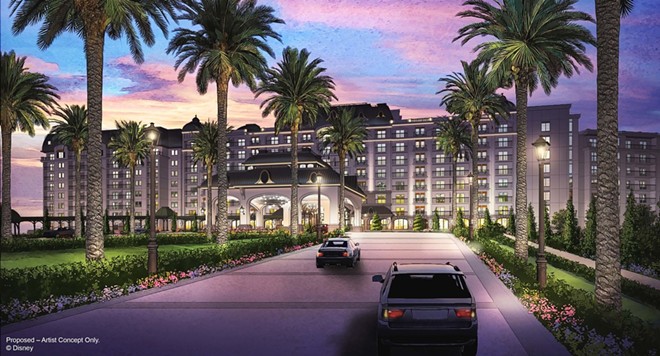 Also at the Contemporary is the Disney Countdown to Midnight: A New Year’s Eve Celebration. The Fantasia Ballroom will be transformed into a party with live DJs, a band, and bites from select WDW restaurants including California Grill, Le Cellier Steakhouse, Narcoossee’s and Tiffins. Chefs will perform via animated shadowboxes and engage with guests as they prepare their dishes. Just before midnight, the party will move outside, where guests will take in Magic Kingdom’s fireworks. Tickets are $299 per guest with a separate VIP experience for $200 more. The VIP experience is inspired by the design of the original Walt Disney Animation Studios and will feature a live pianist.

A Pixar-inspired family-friendly event will take place just nearby on the second floor of the Contemporary’s Convention Center. For $199, guests will meet numerous Pixar characters including Woody, Buzz Lightyear, Jessie, Bullseye, Joy, Sadness, Mr. Incredible, Elastigirl, Mike Wazowski, Sulley as well as Dug and Russell from Up. Instagram-worthy photo ops will fill the room, and a live DJ will play Radio Disney hits. A family-inspired buffet will be accented by a separate kids buffet. Kids will also get their own stations throughout the party including a balloon artist, face painting, and Boot Camp with Sarge from Cars. Again, the party will include an outdoor viewing of Magic Kingdom’s fireworks.

Across the Seven Seas Lagoon at The Grand Floridian, Victoria and Albert’s will host a dress to impress party for $652.47 per person. It will include small bites and a live harpist.

Nearby at Narcoossee’s, special dinners will be available for both Dec. 30 and 31. The NYE countdown to midnight includes a pre-set holiday dinner and firework viewing for $350 per adult and $140 per child.

At the Boardwalk’s Atlantic Dance Hall, a champagne toast will help ring in the New Year, and fireworks will be replaced with a midnight confetti drop, though Epcot’s fireworks will be viewable from the outdoor balcony. Entertainment will include a live DJ and special appearances by Mickey and his friends.

Numerous other events will take place the various venues around Disney Springs and the seven hotels nearby.

Reservations for all the events, except those at Disney Springs and the Disney Springs hotels can be made via Disney’s website or by calling (407) WDW-DINE.