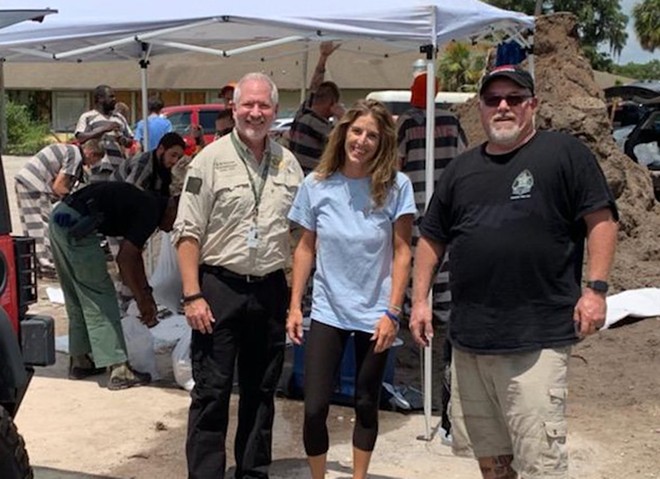 Yesterday, with not even a whiff of irony, the Pasco County Sheriff’s Office posted a photo to their social media channels showing an unpaid inmate work crew shoveling a pile of dirt, paired with the caption “Never give up on your dreams!”

It's hard to say what exactly this post is trying to convey. Are they arguing that the more you dig, the more likely your dreams will come true? Or, if you give up on your dreams, you'll end up like one of these guys, shoveling crud into bags. Or, maybe they're just saying that the ultimate dream is overseeing an inmate work crew.

It's tough to say.

According to a response from the PCSO Twitter account, the photo isn't new and shows inmates who “volunteered” to help fill sandbags to prepare for the perceived threat of Hurricane Dorian last August, and that “everyone there was just trying to help the community as we prepared for the hurricane.”

Never give up on your dreams! pic.twitter.com/8SzJNjVH26

This is a rather bold take when you consider they are not volunteers in the typical sense of the word, they’re actually inmates, and shoveling dirt for free is hardly a “dream” for anyone.

But unfortunately, during Florida’s hurricane season, work crews like this are a familiar sight and are often spotted filling sandbags or cleaning up loose debris.

WAITING FOR SANDBAGS - county inmates in #News13Brevard County are filling sandbags for residents - some who’ve waited in lines for HOURS to be prepared to protect their homes from potential floodwaters from Hurricane #Dorian ⁦@MyNews13⁩ pic.twitter.com/fUKjh4nNtW

For those of you saying, "Well, don't do the crime if you can't do the time," you should know that Florida’s dependence on unpaid inmate labor wasn’t born out of a communal spirit to learn valuable life lessons through shoveling dirt and picking up sticks.

In fact, it actually goes back well over a hundred years, starting shortly after slavery was abolished with a poorly crafted 13th Amendment and lawmakers looking for the cheapest possible way to build the state’s first penitentiary.

Now, after years of petty charges and over-policing, Florida’s Black community is without a doubt carrying the hefty burden of these inmate work crews. Despite making up less than 10% of the state’s population, Black men comprise 45% of the Florida prison population and 43% of the state’s work squads, reports The Florida Times-Union. Of course, when they're done, they will have nothing to show for their work.

So calling it a way to “help the community” grossly ignores the inherently racist roots of the estimated 6.6 million hours of “free” labor, which the Department of Corrections says saved taxpayers roughly $67 million since 2015.

As Paul Wright, the director of the Human Rights Defense Center in Lake Worth, said to the Miami New Times, this "work" really should be called “slavery.”

"It’s not that much different from a slave plantation," said Wright. "The only difference is now the slave owners wear uniforms and their employer is the state."