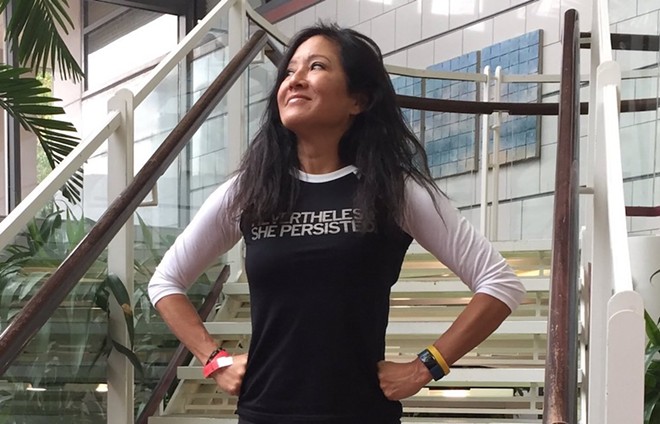 WESH 2 announced Tuesday morning the death of longtime Central Florida news anchor Wendy Chioji. Her brother shared news of her passing on Monday night, following an 18-year battle with breast cancer.
"My beautiful, strong, defiant, bad-ass sister, Wendy Chioji, lost her fight with cancer tonight. From climbing mountains, to participating in triathlons, to traveling the world, she lived every day to the fullest. She never let her disease stop her from doing the things that she wanted to do. She is my hero, and I miss her already," wrote Alan Chiogioji.

It is not difficult for anyone who knew Chioji, only 57 when she died, to describe her, as she was a particularly open and deeply kind woman who rose to success in the extremely competitive and sometimes hostile local media environment of the 1980s and '90s. Remembrances of her continue to appear on social media.
Chioji shared details of her first cancer diagnosis on April 30, 2001, on the air with viewers and through a series of WESH blog posts. In 2013, she shared on her personal blog that she had been diagnosed with a fast-growing cancer of the thymus gland.

Born in Oxnard, California, Chioji grew up in Silver Spring, Maryland, and attended college at Indiana University in Bloomington, Indiana. She moved to Orlando from Savannah, Georgia, in 1988, joining WESH as an evening reporter.

WESH listed some of her biggest stories over two decades at the station, including the space shuttle Columbia disaster, the pope's visit to Cuba, the Atlanta Olympics bombing, the Salt Lake City Olympics, political conventions, and presidential visits.

Chioji's team-reported series, "A Heroin Emergency," won an Emmy award, and her coverage of the Shuttle Columbia disaster won the duPont Columbia award. While she was at the height of her fame, she could still be spotted leading fitness classes around town.

While she lived in Central Florida, she served as an officer of the board of Canine Companions for Independence, an agency that trains and provides service dogs for the disabled, as well as the advisory boards of the Hope and Help Center, a AIDS service organization, and the Ripple Effect, an agency that helps homeless people.

She retired from television and left Central Florida in 2008 to move to Utah for a new life focused on physical fitness and athletics. She particularly enjoyed cycling and mountain climbing, and completed numerous Ironman distance triathlons. According to WESH, in 2014, she climbed Mount Kilimanjaro just weeks after undergoing chemotherapy and documented the journey in a film called Conquering Kilimanjaro.

my darling, brave friend is gone... free of the bonds that broke her body but never her spirit...it is soaring now... Wendy was a barrier breaker in television news.... a journalist of true character and talent who never forgot the human element of the story... love you Wendyl! https://t.co/ufJUGAjori


On her "Live Fearlessly" blog, notes the Sentinel, Chioji wrote detailed updates on her life and health, revealing in 2013 that she had cancer of the thymus gland. In August, she said her doctor had suggested that "hospice is always a reasonable option," but reacted by writing, "I remain unafraid to die, but not now. I’m not ready. I haven’t finished fighting with all the weapons available to me, and I have too many things to do and places to go. Still, it took me a good twenty minutes to get my shit together enough to say, ‘No hospice. I’m not ready for that.'"

This writer knew her personally from a visit to WPRK-FM at Rollins College in 2005, where she participated in on-air game shows and even took a tour of a studio bathroom while on the air. She often made friends during her media visits, following up with personal messages years later.

"Wendy would not want us to be sad, because she was a fighter and a happy person," said anchor Amy Sweezey on WESH Tuesday morning. "She had pie for breakfast all the time and she bragged about the fact that she would eat pie for breakfast 'because you only live once,' and she said that a lot."