The Villages, a giant Sumter County retirement mecca packed with Trump-loving Baby Boomers, is also a mecca for the highest rate of full-time employees stuck in poverty, says a new study.

The term for this is “working poor,” which means despite having a job, you are unable to pay your bills, afford healthcare or other basic necessities, and are essentially just one accident away from sliding into near irreversible poverty. So in terms of the The Villages, the people working at the many tiki bars, golf courses, and health service centers are apparently barely keeping it together.

According to a recent report from financial site 24/7 Wall St., The Villages has the literal highest working poor rate in the country, at a whopping 4.4%, which is significantly higher than the national average of 3%.

Overall, The Villages has an official poverty rate of 9.2%, says the study.

The report also states that only 34.5% of the population in The Villages, between the ages 16 to 64, actually work full-time. This would also help explain why the community also boasts a 4.9% unemployment rate.

For the minority of workers who work full-time, many work in the low-paying jobs in the retirement industry. Some 25.0% of workers are employed in education and health services, and 9.5% are employed in leisure and hospitality — each among the largest share of any city. The average wage for workers in the education and health services and leisure and hospitality sectors are $835 and $405 a week, respectively, far less than the $1,101 average pay for all workers nationwide.


The report used data from the 2013 to 2017 from the U.S. Census Bureau’s American Community Survey, as well as data from the Local Area Unemployment Statistics program of the Bureau of Labor Statistics.

Besides The Villages, Sebring was the only other Florida city to make this list, coming in at No. 11 with a poverty rate of 5.7% for its full-time workforce. 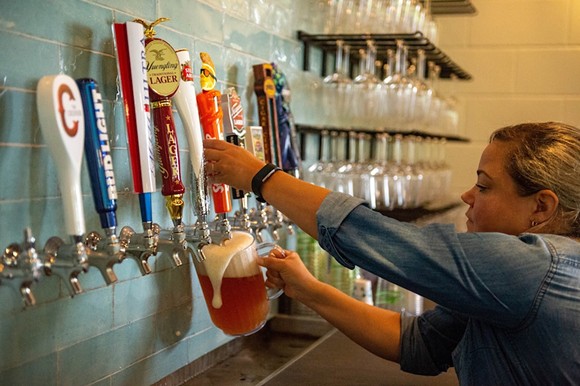 Obviously, there are plenty of factors that contribute to this report, like our state’s depleting availability of affordable housing, a lack of rent controls, our abysmally low minimum wage, and the GOP’s constant attacks on public assistance programs like SNAP.

But low wages aren’t just isolated to Sumter County. A 2017 report from United Way found that 3.3 million households across Florida, which is almost half of Florida’s families, are classified as “working poor.”