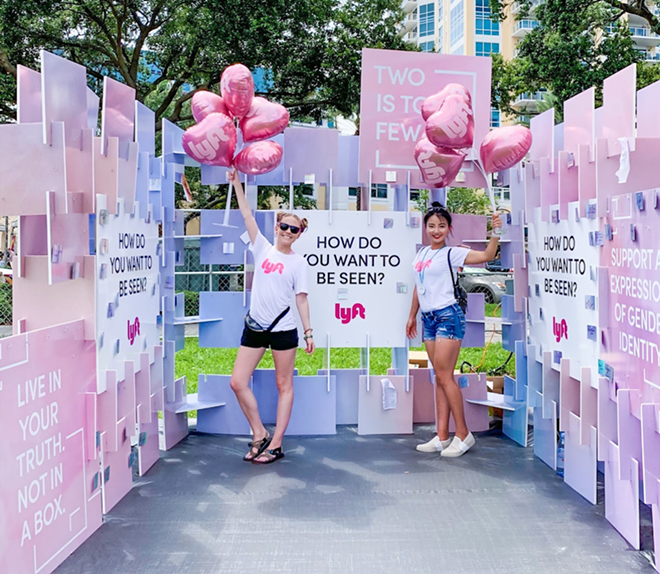 Lyft has announced a partnership with Orlando’s Come Out With Pride this weekend to celebrate the local LGBTQ community through Pride donations, specially designated pickup locations, and an interactive experience to celebrate non-binary gender identification.

The popular ride-hailing service and Uber competitor will donate $1 to Come Out With Pride for every ride taken to or from Pride this weekend, "to promote unity among Orlando’s LGBTQ community and all people throughout the State of Florida," according to a company release.

During Pride celebrations on Saturday, the service is providing three designated pick up/drop off locations a few blocks away from the parade route:
Lyft is also inviting festival-goers to stop by their experience booth on Saturday at Lake Eola Park and share which gender pronoun represents them best and why, as part of Lyft’s “Two is Too Few” campaign. Lyft also offers their drivers, who are still considered independent contractors, assistance to change their name and gender on their licenses and their pronouns within the app.

A necessary reminder, of course, is that Lyft is facing a flood of sexual assault and harassment lawsuits over driver behavior and charges that the company does not take adequate steps to protect riders. NBC reported in September that a California lawsuit brought by 14 plaintiffs alleges Lyft failed to conduct adequate background checks for its drivers, setting up "a pattern of young, unaccompanied or intoxicated female passengers to use its service and subjects them to harassment and sexual assault."

The suit further alleges that as early as 2015, Lyft became aware that drivers were sexually assaulting and raping female customers, but that the company "continues to hire drivers without performing adequate background checks" or implement reasonable driver monitoring procedures.