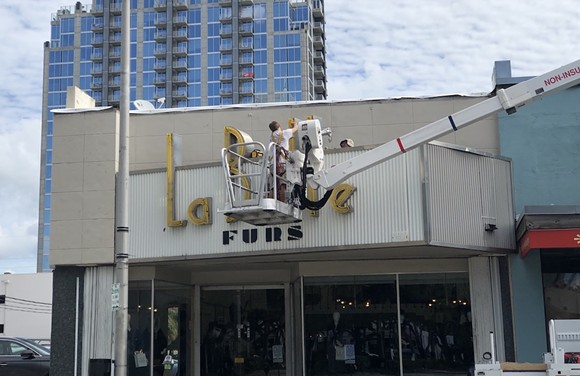 On the way into work this morning, we spotted the iconic La Belle Furs sign in the process of bring cleaned, repaired or – dare we suggest – removed.

Shoppers, PETA activists, and fur aficionados have long known the sign, which has been an Orange Avenue landmark since 1957.

In February of 2018, owner Art LaBellman retired, leaving the fourth generation of Labellman, his son Alex and daughter-in-law Santa, at the helm of Orlando's only fur shop.

What began as tailor shop in the early 20th century transitioned into the largest full-service furrier in the entire state of Florida, which also sells leather and cashmere goods.
We reached out to La Belle’s and they confirmed the store is not only remaining open, but they are celebrating their centennial. The sign is being repaired, to keep up with the interior renovations and updated inventory.

So for now, another historic landmark stays put.