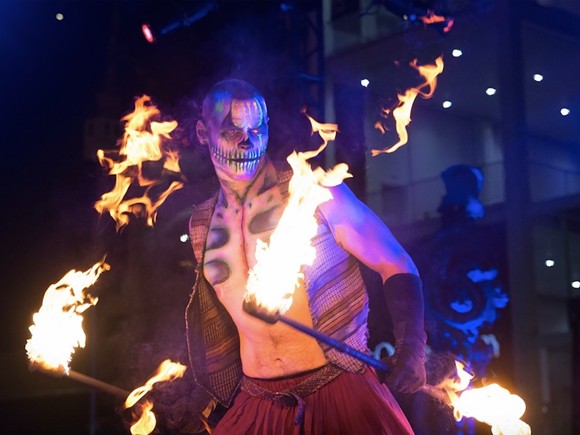 The future of one of Orlando’s most recognizable hotels and one of the region’s newest Halloween attractions might hit some rough seas ahead, thanks to a historic ship on the opposite side of the country.

The Holiday Inn Suites and Waterpark in Orlando, the world’s largest Holiday Inn resort, is better known as the former Nickelodeon Suites Resort, typically shorthanded as the Nick Hotel. Located just across I-4 from Walt Disney World in the midst of Central Florida’s tourism district, this year the 777-room resort hosted a brand-new Halloween event, Dark Horizon.

A kid-focused resort hosting an adult-centered Halloween event in its parking lot at first glance might seem odd. To understand what is actually going on here, one has to head to California.

In December 2014, the Nick Hotel was purchased by Los Angeles-based private real estate investment and development firm Urban Commons. The small investment firm was in the midst of an aggressive multi-year expansion. Just two years prior, it had acquired 15 hotels, spending more than $180 million, via a partnership with Brighton Management. At that time, Urban Commons explained their success was thanks to a focus on "distressed and/or bank-owned hotels, where they see the greatest growth potential and upside opportunity for their investors."

The Nick Hotel was a stark departure from the typical business-focused hotels the company had previously purchased. It was also one of the most significant purchases in the company’s history, but the massive investment would soon be overshadowed by an even larger deal, one that some say may eventually lead to the company’s demise.

Less than 14 months after purchasing the Orlando resort, Urban Commons confirmed that the partnership with Nickelodeon was coming to an end. Orlando’s bad news was quickly overshadowed by the highest-profile deal in Urban Commons’ history, when three months later, it negotiated a 66-year operational lease of Long Beach’s famed Queen Mary ship. 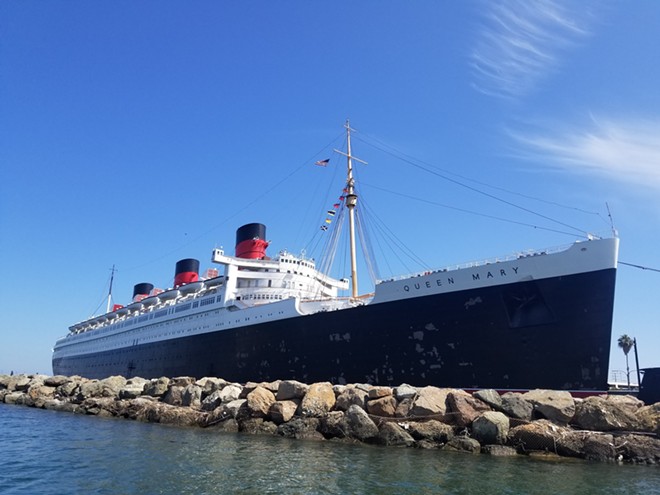 When announcing the estimated $143 million deal, Urban Commons founder Taylor Woods told the Los Angeles Times that he hoped to have a master plan for the Queen Mary property, which includes a large surface parking lot and an abandoned English-themed shopping village, with the full project being finished within five years. Despite no previous experience in owning a historic attraction like the Queen Mary, the company was eager to take on the challenge, attracted to the ship due to its already well-performing on-board hotel.

Even after Urban Commons scrutinized every detail of operations at the Queen Mary, one division they kept is their special events, produced by Epic Entertainment Group. Epic’s Dark Harbor-branded Halloween event was already one of Southern California’s best, competing directly against theme park events like Knott’s Scary Farm and Halloween Horror Nights at Universal Studios Hollywood.

Equipped with a proven track record, Dark Horizon comes to Orlando from California
By Seth Kubersky
Live Active Cultures
Since debuting in 2009, Dark Harbor had quickly become the signature event of Epic Entertainment Group, who has had strong ties to the Queen Mary since its founding. The high-quality Dark Harbor event helped Epic become well known throughout the haunt industry.

Right as Urban Commons was ramping up significant renovation projects, including a $27.5 million remodeling of Orlando’s Holiday Inn Suites and Waterpark, back in Long Beach, there was bad news for the Queen Mary. City-backed financing for emergency repairs had been depleted due to numerous cost overruns. Similar cost overruns have haunted the 80-year old Queen Mary since it first sailed into the Port of Long Beach more than half a century ago. This was the reason past leaseholders, including Disney and the Diners Club, had to bail on their leases.

"Restoring or even maintaining a historic vessel like the Queen Mary is not something that is accomplished overnight. We knew this would be a long road and that the end product would be something of great importance to the Long Beach community, which is why we were eager to roll up our sleeves and get to work from day one," said Dan Zaharoni, Chief Development Officer of Urban Commons, in a press release published Feb. 26.

Back in Orlando, the Holiday Inn Suites attempted a family-focused Halloween event, Terror at the Inn. The tween-friendly event included an indoor haunted house, carnival-like games, kid-friendly 4D movies, and photo-ops with walk-around characters. While no official comment was ever given by the company, reports of low attendance point to the event being a failure.

February of this year saw Urban Commons announcing it was ready to move forward with its previously announced Queen Mary project.

In an attempt to raise at least $566 million, the Urban Commons-sponsored Eagle Hospitality Trust was listed on the Singapore Stock Exchange in May. Ahead of the IPO, Urban Commons folded 12 of its 14 hospitality assets, including the Orlando Holiday Inn Resort, into Eagle’s offerings while holding a 15.2% ownership. Two-thirds of Eagle’s assets are Urban Commons-managed properties. Even before it went live, it was clear the IPO would disappoint.

The 559.34 million shares were expected to open around US$0.80-0.81 each; instead, it opened at $0.78. Urban Commons' financial issues aren’t looking any better, despite sales at the Queen Mary likely pulling in as much as $12-$15 million per year, according to a source familiar with the company's finances.

Earlier this month, the Long Beach Post obtained a letter that the city sent Urban Commons stating that the company had failed to meet its lease obligations, giving the company 30 days to address a number of repairs and to release a contractually required 2018 financial audit.

Throughout all of the financial woes, a single bright spot remained; Dark Harbor and the other holiday events. Two separate people familiar with the company’s business plan confirmed that Urban Commons was leaning heavily on Dark Harbor as one of its primary ways of pulling a profit at the Queen Mary.

As bills mount and uncertainty remains, Dark Horizon might be both Urban Commons' latest attraction and a description of its own future. Dark Horizon Orlando is open on select nights now through Nov. 2. Multiple discounts, including Groupon deals, are available.