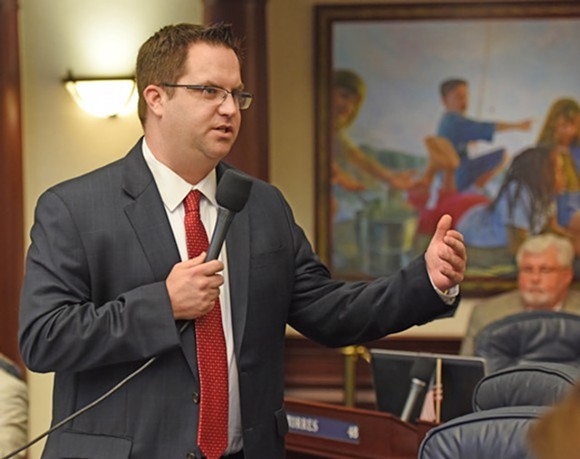 A House education panel on Thursday began delving into the issue of raising teacher pay, with a key lawmaker saying that while "everything is on the table," the panel still needs to figure out where the money would come from.

Rep. Chris Latvala, a Clearwater Republican who chairs the House PreK-12 Appropriations Subcommittee, said his panel has been asked by House leaders to find about $500 million in potential cuts as part of a broader budget exercise. But that exercise also could help determine if a teacher-pay package would be viable.

“That’s something that we will find out in the coming month or two,” Latvala told reporters.

Latvala said House leaders directed budget panels to do such exercises ahead of the 2020 legislative session, after state economists warned about a possible economic slowdown and a relatively small budget surplus next fiscal year.

But the effort also comes after Gov. Ron DeSantis’ proposed raising the minimum starting salary of Florida teachers to $47,500, a proposal with an estimated $603 million price tag. The governor is pushing the potentially popular plan as dozens of lawmakers run for re-election in 2020.

“I am happy that this is something that is not a pie in the sky,” the governor said last week when he rolled out his proposal. “This is achievable, so we have to get this done.

Latvala said it remains unclear exactly how the Legislature would be able to pay for increasing teacher salaries and whether lawmakers would be able to bypass county school boards, which negotiate contracts with teachers.

Florida ranked 27th in the nation for average teacher starting pay during the 2017-2018 school year at $37,636. tweet this
However, Latvala was hesitant to endorse a repeal of the controversial “Best and Brightest” teacher bonus program, which received $233.9 million in funding in the current year’s budget.

“I am a strong supporter of Best and Brightest,” Latvala told reporters. “But when it comes to rewarding our teachers, everything is on the table.”

In the Senate, Appropriations Chairman Rob Bradley, R-Fleming Island, is pushing to eliminate the bonus program because he said it has “managed to frustrate many good teachers with seemingly random outcomes” and has “made many good teachers feel less appreciated.”

Bradley filed a bill to end the program after the state agreed to pay $15.5 million to settle a class-action lawsuit that focused on allegations that the bonus program discriminated against black and Hispanic teachers.

Those allegations stemmed from the state’s past use of teachers’ scores on ACT and SAT college-entrance exams in helping determine whether teachers should receive bonuses. This spring, the Republican-dominated Legislature and DeSantis moved to do away with that test requirement.

Senate Education Chairman Manny Diaz Jr., R-Hialeah, said this week that when it comes to teacher compensation “everything is on the table” —- a comment echoed by Latvala. But Diaz added that if the bonus program is repealed, it would free up a lot of money that could be used somewhere else.

Latvala also said he would not overlook potential scenarios in which a $47,500 minimum salary would lead to experienced teachers making only slightly more money than brand-new teachers, something the governor has not addressed.

The Florida Education Association, a statewide teachers union, has said it is encouraged by DeSantis’ focus on teacher pay, but it also has raised questions about how the plan would help retain longstanding teachers.

Florida ranked 27th in the nation for average teacher starting pay during the 2017-2018 school year at $37,636, according to the National Education Association. The national average starting salary was $39,249.

The state’s overall average teacher pay in 2017-2018 topped $48,000, but educators have long called for higher salaries as Florida has ranked near the bottom nationally.

Rep. Tracie Davis, D-Jacksonville, told Latvala at the meeting that it is also important to consider raises for school employees who are not considered instructional personnel.

“There are teachers that have never been included in any type of bonus programs that we have. So, the pay increase across the board, especially for those ESE (exceptional student education) teachers and those reading coaches and those people who are not considered instructional personnel, are very important," Davis said.