October 21, 2019 at 8:59 PM
comment
Updated Tuesday, 7 p.m. | We had a chance to speak with the new owners of Dexter's in Thornton Park on Tuesday, who have some positive news to share. One of them, Brian Minkel, says he arrived at the restaurant to take possession of the keys on Monday, not expecting to find guests still inside being served. He did ask the people inside to clear out. Seems reasonable. Guest David Kaminsky affirmed online later they "just stop[ed] serving and locked the door," he also had two glasses of wine comped by the owners. Kaminsky lightheartedly shared he was "still pissed" on Facebook, but admitted they "didn’t kick me out," adding, "but it was such a shock they shut it down so abruptly and no one could order anything. (Let alone it was raining!!!)" The new owners just want to restore the best parts of old Dexter's, announce reopening plans soon, and move on. We will post a new update shortly and link to it here.

Our Facebook post about this has been blowing up, with past and current Dexter's employees weighing in. We've added a few of the comments below. From earlier:

A photo taken inside Dexter's in Thornton Park by diner David Kaminsky shows the restaurant closing, during dinner. "Fitting it’s raining. Dexter’s just shut down and kicked everyone out! Will reopen with new owners ... later in week???!?" wrote Kaminski in his post.

Orlando Weekly events and marketing manager Jessica Pawli spotted and shared the sad news. Local restaurant writer Scott Joseph had posted on Monday about the closure, writing, "As anticipated, Dexter’s of Thornton Park has closed. New owners – investors from Vero Beach – are expected to take over the space with a new concept that a source says will be upscale dining." 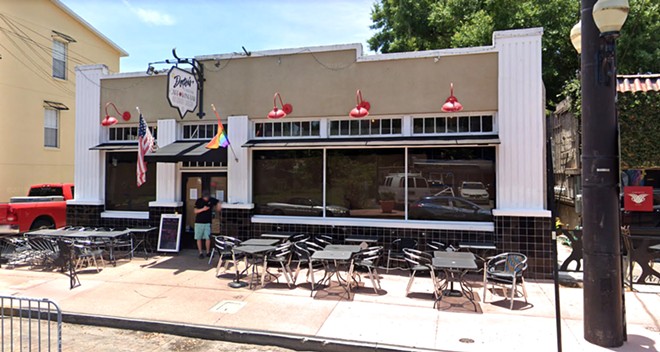 Our own Faiyaz Kara has been reporting about the Winter Park location moving to the Ravaudage Plaza at Lee Rd. and Orlando Ave., reopening under new ownership as Dexter’s New Standard. The closing makes Dexter’s Lake Mary outpost the only Dexter's-branded restaurant currently open.

The thing is, even though Kaminsky was able to order two glasses of wine, the establishment was technically not meant to be open on Monday ...
Following our social media post on Monday night, current and former Dexter's employees weighed in on the news.

Reader Daniel Boone Savage commented, "As someone who has worked at Dexter’s for many many years I would like everyone to know that the group who bought and flipped dexter’s, so they all could make however much money they made, just ended employment for 45 people. 10 days before rent is due." He added, "And this was one of the owners responses after I texted him," concluded Savage. "Still no regard for people who have to pay their bills in 10 days."

Another reader, Allie Workman, responded by saying, "Daniel Boone Savage this whole thing makes me so angry! You have been my server for years at Dexters and I’ve always enjoyed having you take care of us. I’m so sorry this is happening to you all. So unfair."

Jodi Krajewski wrote she was working at Dexter's in Thornton Park Monday night, disputing the online account of how the restaurant closed.

"Sure it was an odd time for us to close, but literally only one couple was very apologetically told that the kitchen was closed. Mr. Kaminski was compensated with 2 complementary glasses of wine," wrote Krajewski. "Nobody was asked to leave at all!! Nobody was eating at the time either!! Not to mention... A few regulars stopped by after the doors were closed and were invited in for complementary drinks!"

Kaminsky responded "it was such a shock they shut it down so abruptly and no one could order anything. (Let alone it was raining!!!)," to which Krajewski later responded, "it wasn't the best situation… But these types of things never go smoothly. Let's just look forward to the future & many good times that will take place in that building! Dexters will always remain a legend!!"

For the record, the new owners are looking forward to having Kaminsky and the team back, when the restaurant re-opens. You can follow the dialog on Facebook. Look here for more soon about the new plans for Dexter's in Thornton Park.
Stay on top of Orlando news and views. Sign up for our weekly Headlines newsletter.