Ominous Descent is the most frightening haunt in Central Florida

The final weekend before Halloween is here, and hard-core haunted house fans are still seeking one last scare before the season ends. Have you already exhausted the intellectual properties at Universal Orlando's Halloween Horror Nights, and engaged with the interactive spirits at Dark Horizon? Then it's high time for you to brave the trip down I-4 to Ominous Descent, the most frightening haunt we found in Central Florida this year.

Ominous Descent is located in Plant City at Sir Henry's Haunted Trail, which took in the fledgling haunt during its first year when a 2017 storm destroyed their original intended location. The partnership has served both attractions well, creating a destination that's well worth the hour-plus drive from Orlando through Disney-area traffic. 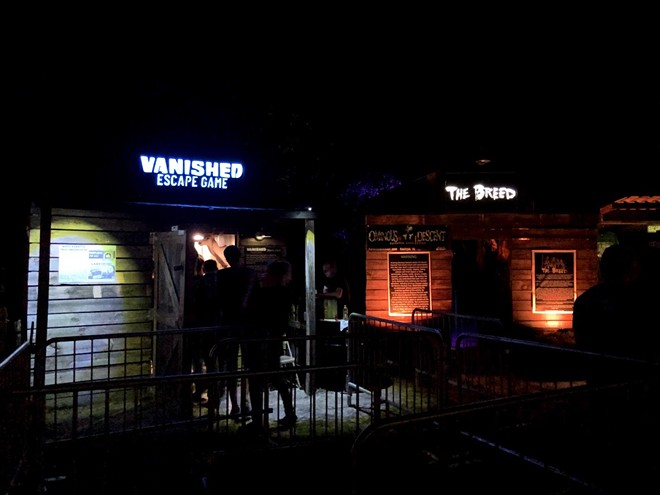 We started with a walk through "The Harvester" and "Reaper's Haunting," the two trails by Sir Henry. The backstories are fairly simplistic, as are the scenery and special effects, but both trails impress with their sheer length; you'll walk well over a half-mile, through both indoor and outdoor environments, as you explore the wooded property. The volunteer cast members, which include a number of creepy child performers, are impressively aggressive and managed to give me a couple of good jump scares.

Sir Henry's two tween-friendly trails make a perfect warm-up for "The Breed," Ominous Descent's deliriously disgusting descent into an incestuous clan of cannibals. The haunt has been expanded since my last visit, making it far longer than the mazes at Orlando's events, and the well-paced experience provides an unrelenting assault from the farmhouse facade entrance to your final chainsaw-fueled escape.

Ominous Descent's denizens don't manhandle guests, unlike some other "extreme" haunts. However, the perverse performers do everything else imaginable in order to invade your space from every angle — even above.

There's also more gore in this one maze than in all of Universal Studios Florida combined; one intestine-munching moment is memorably intense. But Ominous Descent isn't only about blood and guts; there are also some truly awe-inspiring aesthetic touches, like a laser-lit fog swamp that conceals an applause-worthy saurian surprise.

There's a $10 general admission fee to attend without experiencing any of the haunts. Since there's no live shows or music, there's little reason for scaredy-cats to hang out here, but serious haunt fans who are tired of overpriced cocktails and overcrowded photo ops will find Ominous Descent's devious deprivations more than worth the drive.