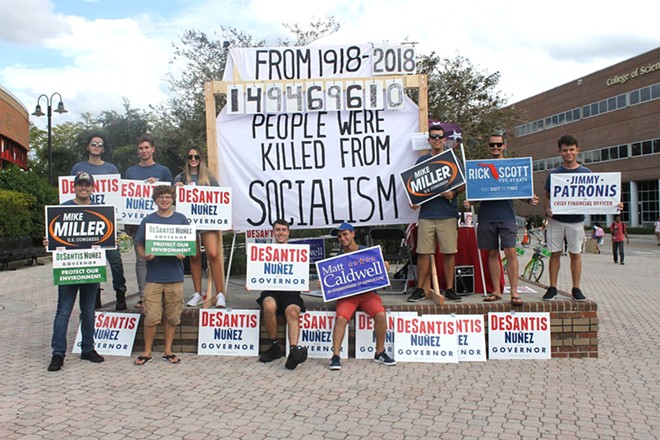 A group of students at UCF hope to show Orlando that taking environmental responsibility doesn't have to be a partisan issue. The College Republicans at UCF are hosting their very first beach cleanup on Saturday, Nov. 9, from 9 to 10 a.m. at New Smryna Beach.

Even though the hour spent picking up trash will do little to address water pollution from the deregulation of septic tanks – or from Republican preemption laws, which prohibit cities from banning the plastic and styrofoam containers that contribute to beach pollution – the group hopes to increase awareness and participation in climate-change conversations.

"We hope to use this event to promote environmental awareness and encourage college students to become more engaged and active on these issues," said chairman Luke Strominger in a press release.

Republican groups are smart to address climate change, since failing to do so will increasingly cost them political capital and, ultimately, votes. According to PEW Research Polling, nearly 60% of millennial Republicans agree that climate change has had some sort of effect on the U.S. More and more younger Republicans are accepting the fact that human beings are responsible for the planet's decline.

Even Florida Gov. Ron DeSantis has been less restrictive than past Republican governors on discussions of climate change. In his first week in office, DeSantis signed an executive order in January to tackle Florida's many environmental problems, like toxic algae, sea level rise and Everglades degradation.

Considering eight of the 10 metropolitan areas most susceptible to climate catastrophe are located in Florida, we will need bigger solutions than a beach cleanup. If this first step leads to a greater acceptance of the urgency of climate-change policies, then more power to them.

The event is in coordination with the American Conservation Coalition, an organization founded by a Wisconsin college student. In an email, communications director Bethany Bowra says the ACC is a millennial-led environmental group that is "working to bring conservatives back into the environmental conversation." Even though conservative newspaper the Washington Examiner has called the ACC "liberal environmental activists" in March who "infiltrated" the Conservative Political Action Conference, they have quite a few conservative leaders on board, and publish blog posts like "Elizabeth Warren’s War on Oil Would Harm American Consumers."

Even though the beach cleanup event event does not appear to have a social media event page, we will update the story as links are published.

Let's hope these kids follow through, before another generation grows up to further destroy the world.
Stay on top of Orlando news and views. Sign up for our weekly Headlines newsletter.