Universal gives new details on its Beijing park, but what does that mean for Orlando?

Universal was sparse with the details about its new Epic Universe park, when it finally announced it in August. Now, another new Universal park holds clues as to what we can expect.

After multiple delays, Universal has now confirmed the Universal Studios Beijing resort will open in 2021, about two years ahead of Epic Universe in Orlando, where land grading is ongoing, with its opening now confirmed for 2023. Land grading began in Beijing in 2016, with vertical construction ramping up earlier this year. This five-year plan is similar to the timeline for the new Orlando park.

While we knew some about the park last year thanks to a number of leaks, since then, Universal has confirmed new details on the Beijing park.

Universal Studios Beijing will have seven themed lands, while Epic Universe will open with four themed “worlds” and an ‘entrance corridor’ that could be viewed as a fifth land. Orlando will be built with at least two expansion pads, bringing its total capacity to seven, as well. Islands of Adventure and Universal Studios Florida both also have seven lands.

Just like the Singapore park, Universal Studios Beijing is a "best hits" park, with lands inspired by Islands of Adventure and Universal Studios. Classic Universal pieces like a Hollywood area with a Mel’s Drive-In, a Forbidden Journey-anchored Hogsmeade, and a central lagoon are all found within the new park that’s laid out like a figure-eight.

The famous stunt show "WaterWorld" will be brought to the new park and expanded to include a full land with dining and entertainment. Found in Hollywood and Japan, the stunt show was rumored for Epic Universe, but renderings released of the new park instead show a large, 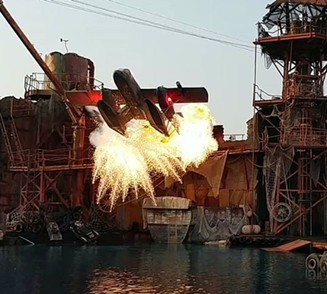 more traditional amphitheater within the Universal Monsters land. It’s still unclear why "WaterWorld" was canceled and what type of show this new amphitheater will host, but the conventional-style amphitheater will better accommodate special after-hours events, especially important considering Epic Universe’s location to the Orange County Convention Center. Beijing will include a Universal Music Plaza similar to the one found at Universal Studios Florida.

Universal Studios Beijing will include a Jurassic World: Isla Nublar land, anchored by a brand-new dark ride and an indoor play area similar to Islands of Adventure’s Camp Jurassic area. Jurassic World was once rumored for Epic Universe, though now it seems more likely that Islands of Adventure’s Jurassic Park area will instead be rebranded as "Jurassic World," once the new coaster under construction there opens. With most of Orlando’s Jurassic Park expansion areas now taken over by Harry Potter’s Hogsmeade and Skull Island: Reign of Kong, there is little area for an expansion, though it is still possible that the rumored dark ride in Beijing may eventually make its way stateside.

A Transformers: Metrobase themed land in Beijing is similar to one found at their Singapore park. The land is nearly identical to the Islands of Adventure Marvel Super Hero Island. Discussions between Disney and Universal regarding the Marvel theme park rights have been ongoing for years, with individuals at Universal privately admitting that the comic book-based version of the characters they own are aging. The Transformers land at Beijing may give us a hint at what Universal has planned for a post-Marvel future at Islands of Adventure, though currently Universal Studios Florida is home to the Transformers attraction.

Moving the franchise from Universal Studios to Islands of Adventure would be an unprecedented and expensive move, but it would open up a large swath of land, especially when combined with the nearby Shrek and Minions attractions, both of which are rumored to be closing sooner than later. The Orlando version of Transformers was quickly built ahead of Diagon Alley’s opening, to address crowd flow concerns. The shed-like structure is regularly criticized as one of the ugliest ride buildings in all of Orlando.

The ever-popular Despicable Me franchise receives its most extensive land yet in Beijing. Interestingly, the Beijing park doesn’t have the Despicable Me themed whip-style ride that opened recently at Universal Studios Japan, nor the splash zone play area found at the Hollywood version of the land. It will include a carbon copy of the screen-based ride located in Orlando, Hollywood and Japan.

The Orlando version of that ride is starting to show its age leading to rumors of Universal looking to remove the building. Doing so would help address one of the park’s worst bottlenecks, while also opening up a more substantial area for more entrance area retail, an essential part of any theme park’s sales strategy. With Nintendo now likely headed to Epic Universe, there have been rumors of a Despicable Me land replacing Universal Studios Florida’s Kids Zone. At least one version of the Orlando rumor also includes other attractions based on Illumination films, including a new dark ride themed to Secret Life of Pets and a Sing show, attractions in development at other Universal parks, though notably all missing from the Beijing park.

Back in Beijing, a Kung Fu Panda land rounds out the park. This indoor land will have many similarities to the kid-friendly area heading to Epic Universe. Despite early rumors of the contrary, the Epic Universe land will be outdoors, a disappointing move considering the number of afternoon thunderstorms and heat Orlando sees.

While not confirmed by Universal, Epic Universe’s land is rumored to themed to How to Train Your Dragon, though it is still possible a broader DreamWorks theme that would also include Kung Fu Panda eventually being realized within this area or using a nearby expansion plot. Kung Fu Panda has proven to be a successful franchise for Universal, but thus far no permeant presence of Po has been seen in Orlando. It’s clear Universal plans to change this in the coming years, however a timeline of when and how are still very much up in the air. The Beijing Kung Fu Panda land is similar in style to the How to Train Your Dragon land heading to Epic Universe with a mix of themed flat rides and at least one family-friendly dark ride.

Universal seems ready to embrace omnimovers, the workhorses of Disney’s dark rides. These continual load ride systems allow for high throughput and low maintenance. Epic Universe will have at least two omnimover style dark rides, the aforementioned one and a Yoshi-themed one (though technically this one isn’t an omnimover, since it won’t move from side to side), with more rumored for Universal Orlando. While Beijing won’t have the Nintendo land, thanks to cultural sensitivities between China and Japan, it will likely have the same omnimover style ride system for at least one attraction within the park. Epic Universe and Universal Studios Beijing will also share another similarity, an ‘in-park’ hotel. In Beijing, the park entrance will be underneath the hotel, similar to the entrance at Disneyland Paris. Epic Universe has its hotel bumped from the front of the park to the rear. This allows the hotel to act as the park’s "weenie" and, if rumors are correct, will provide a large screen for nightly projection mapping shows.

Universal will be partnering with Chinese company Alibaba to use facial recognition technology. The technology will be used throughout the park including at entrance turnstiles, express-land access, and for lockers. Some have questioned the feasibility of Universal's rumored plan of having park entrance turnstiles for each land at Epic Universe. Facial recognition technology like that which is planned for Beijing could be used to quickly allow park guests to navigate from land to land without having to scan their fingers or pull out park tickets each time.

Universal Studios Beijing will be the most expensive theme park ever built, costing an estimated $6.5 billion. But the title won’t last long. Tom Williams, Chairman and CEO of Universal Parks and Resorts, has stated Orlando’s Epic Universe will be the company’s largest and most expensive single investment ever.