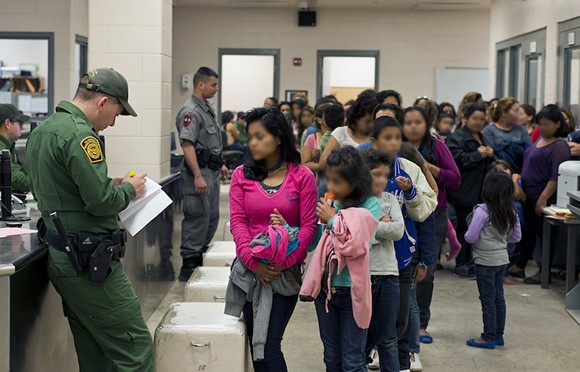 When the federal government suddenly emptied a South Florida detention center for migrant children in August, it was unclear exactly where more than 1,000 children had gone.

Federal officials said only that the children who had been staying at the controversial Homestead center were released to sponsors or transferred to state-licensed facilities that are part of a system of federally funded shelters across the nation.

But 48 of the children were sent to two Florida-licensed facilities, one in Miami Gardens and one in Lake Worth, which is the only state-approved shelter that exclusively cares for migrant teen girls, according to DaMonica Smith, a spokeswoman for the state Department of Children and Families.

Records obtained by The News Service of Florida show the state conducted several checks on both facilities this year. The records give a glimpse of the relatively limited role the state plays in ensuring the well-being of children who were separated from their families after crossing the country’s southern border and being detained.

“DCF is only responsible for licensing and monitoring for compliance with licensing standards,” Smith said.

Both facilities receive millions of dollars under contracts with the U.S. Department of Health and Human Services’ Office of Refugee Resettlement to help the Trump administration deal with an influx of migrant children. Those children have come from the Homestead center, other facilities and the border.

Federal officials declined to comment on the operations of the Florida shelters due to the “privacy and security of the unaccompanied alien children.” But they said it usually takes shelters in the federal network roughly 50 days to release children to their families or other sponsors, a reduction from the 93 days it took in November 2018.

The Lake Worth shelter was housing 38 girls, 11 of whom came from an unnamed facility and the rest of whom were brought from the border. tweet this
The latest checks conducted by the state on one of the shelters took place in July. A Florida licensing specialist went to Lake Worth, in Palm Beach County, three months after the state approved a license for the U.S. Committee for Refugees and Immigrants to operate a 141-bed facility.

The Lake Worth shelter was housing 38 girls, 11 of whom came from an unnamed facility and the rest of whom were brought from the border, Michelle Windfelder, a licensing specialist, wrote in a July report.

“Everything looked great,” Windfelder said. “The staff report experiencing no behavioral issues nor situations with girls attempting to run. Youth present are grateful for their help.”

Windfelder, however, noted the “most significant challenge” in the shelter dealt with medical issues, which staff was working to address. She said some girls had lice and others had burns on their feet, an issue that can sometimes be associated with migrants as they make long treks from their home countries.

The state report also noted a couple of girls had faced issues finding family members or appropriate sponsors. But Windfelder said most of the teens had located someone that could care for them and that the facility was checking on the potential new homes.

By Aug. 30, the shelter had taken in 21 teenage girls from the Homestead migrant center, Smith said. The Homestead center became a flashpoint this year in the national debate about immigration policy and the Trump administration’s handling of migrant children.

In its state licensing agreement, the Lake Worth shelter noted that it would only have the capacity to house 40 girls through June 19, 2020, but that it intends to increase its intake to 141 girls in the future.

Some state lawmakers said last week they were not aware of the existence of the Lake Worth facility for migrant girls. That included Sen. Lauren Book, a Plantation Democrat who chairs the Senate Children, Families and Elder Affairs Committee, which oversees issues involving the Department of Children and Families.

“Sen. (Lauren) Book was not aware of the opening of the facility, and is having her staff gather information from DCF,’ Claire VanSusteren, a spokeswoman for Book said.

Sen. Annette Taddeo, D-Miami, also said she was unaware of the Lake Worth facility but knew about a Miami Gardens shelter, called His House Children’s Home, taking in migrant children. She told the News Service that senators should be getting updated information on state-licensed facilities that care for the children.

In Miami Gardens, His House established its program with the U.S. Department of Health and Human Services’ Office of Refugee Resettlement in 2008, with the latest contract running from February 2017 to January 2020. His House received 27 children from the Homestead center, Smith said.

The shelter also helps Florida’s foster children, and of its 16 cottages, seven of them are licensed for migrant children. Each cottage has five bedrooms, a living room, a dining room, kitchen, laundry room, storage closets and bathrooms as well as an office for staff.

According to DCF records, the Miami-Dade County public schools offer on-site education programs to the migrant children who are at His House.

“The school curriculum is taught by Miami-Dade County licensed teachers. The core of education consists of mathematics, science, social studies, language arts, English as a second language, reading and writing, computers, physical education and vocational education,” according to the facility’s licensing summary.

Clad in jeans and blue t-shirts, their required uniforms, children go to school between 8:10 a.m. and 2:50 p.m.

Under the care of His House, children also get free immigration legal services and engage in individual and group therapy sessions on a weekly basis, or the report says, “as deemed necessary.”

His House said all minors are required to sign an agreement to the rules for discipline, which include consequences based on the level of their misconduct, state records show.

It was not what clear what the consequence list includes. His House referred all questions to the federal agency that oversees the contract. The federal government declined to answer specific about the shelters.

In the state licensing agreement, though, His House noted there is a “zero-tolerance policy for corporal punishment, humiliation, mental abuse, sexual harassment or punitive interference with daily living activities for all children. This is clearly stated in the Staff Code of Conduct which includes consequences for personnel if inappropriate behavior management techniques are used.”