One of the most talked-about films at last week's 2019 Orlando Film Fest was Tales of an American Hoodrat, which won both the festival's Best Ensemble Cast award and its Indie Spirit Award, after being nominated for seven categories overall.

Hoodrat was filmed in South Dakota, a coming-of-age story following a group of high school boys who push the envelope in everything they do. "Drugs, money, sex and jail are only a few of their vices," said festival executive director Daniel Springen at the award ceremony.

At the center of the film is 24-year-old Brandon Lunzman, who wrote the script, directed on set, edited the footage and starred in the lead role.

His mother, M.J. Lunzman, became the executive producer, funding her son's dream to direct his first feature-length film, an experience as new to her as it was to the young filmmaker.

"We did everything they told us not to do, like don't star in your first feature film, don't edit a film you directed, don't create too many characters," said M.J. Lunzman. "We proved that it is possible to do all those things in a single film."

Brandon Lunzman studied film production at Full Sail University in Winter Park, and graduated in 2017. Considering it's his first-ever film submitted to a festival, Hoodrat could be considered a successful debut.

"I had to learn along the way," said M.J. Lunzman during a Q&A session after the last screening. "I've never produced anything before."

The comedy-drama was deemed a must-see by early festival audiences, catching the attention of those who don't typically watch "frat-boy" movies. Other filmmakers at the festival congratulated Lunzman for succeeding with such uphill work.

"My biggest challenge was definitely taking on so many key roles," Lunzman said. "I'm my own worst critic, so having to piece everything together while watching yourself over and over again became emotionally draining." 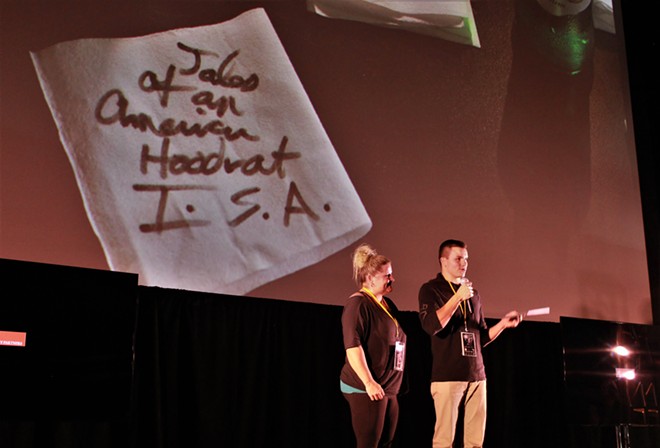 Festival organizers described the film as hilarious and oddly relatable. Lunzman said the story was based on true events, and the characters on people he knew growing up.

"Brandon created characters that for me were so close to my 20s, they're impenetrable," said Springen. "I'm telling you, this kid is going to be a superstar, mark my words, write his name down, watch his movie."

Tales of an American Hoodrat was requested enough for the festival to add a third showing.

Lunzman said he is now hoping for the film to get picked up for distribution, so more audiences can eventually watch his work in theaters within the next year or so. You can follow their progress on the film's Facebook page.