Florida Rep. Matt Gaetz says he kind of likes being called a 'tool' 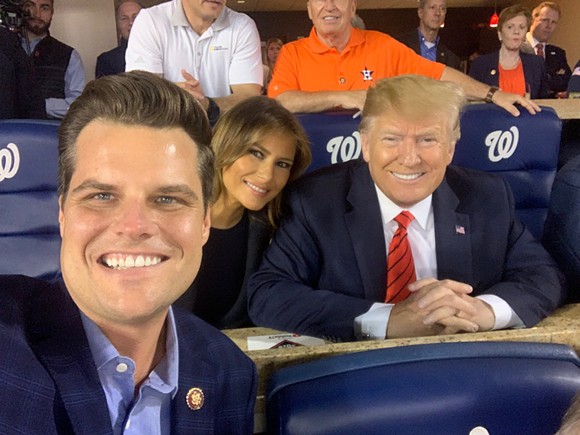 Right now, one of the top trending topics on Twitter is about how Florida Rep. Matt Gaetz is a tool. The hashtag #MattGaetzIsATool was launched by the executive producer of The Ellen DeGeneres Show, Andy Lassner, who added, “Please don’t try and make this hashtag trend. Thank you.”

Lassner’s tweet comes a couple of days after the NBC employee wrote “What a tool” on a retweeted image of Gaetz sitting next to President Trump at Game 5 of the World Series. Gaetz then suggested that the network shouldn’t stand behind employees who make such a “dumb/triggered/profane comment."

Well, it would now appear that Lassner is doubling down.

Gaetz, who is actually a seasoned veteran of getting roasted online and was just recently referred to as a “fool” by former Tampa Bay GOP lawmaker David Jolly, responded to Lassner’s dig this afternoon by saying “I kinda like it,” along with a video of a shirtless man swinging a sledgehammer and the caption “I came in like a wrecking ball.”

While the accompanying video doesn’t make much sense, it raises the possibility that perhaps Gaetz doesn’t know what a wrecking ball looks like, or even worse, that the 37-year-old District 1 congressman has never seen a literal tool in his lifetime.

So far, the hashtag is still going strong, and various celebrities have joined in, including Scrubs star Zack Braff and Kristen Johnston of the CBS sitcom Mom.

Gaetz is up for re-election in 2020, and his Democratic opponent is U.S. Navy Veteran Phil Ehr.