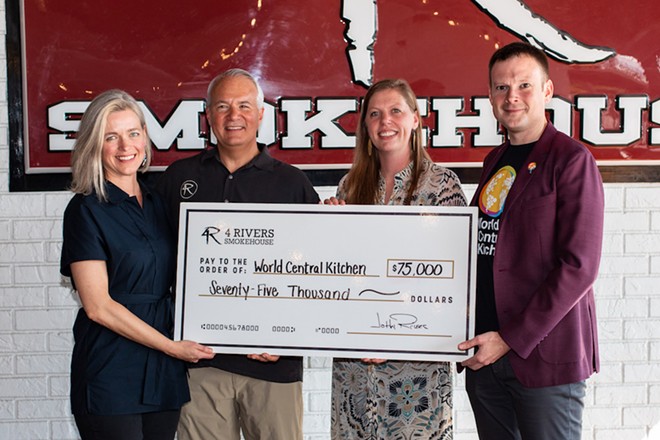 The company behind 4 Rivers Smokehouse and the COOP announced a $75,000 donation to World Central Kitchen on Wednesday, to be spent on relief efforts for people in the Bahamas in the aftermath of Hurricane Dorian.

The nonprofit organization was founded by Spanish chef José Andrés and is devoted to providing meals in the wake of natural disasters. The funds stem from a Sept. 8 charity drive that included all 4 Rivers locations in Florida and Winter Park’s the COOP, breaking from its "closed on Sunday" policy.

The smokehouses continued to raise funds throughout the September by giving diners the option to round up their check totals. The check was presented at a ceremony on Wednesday at the 4 Rivers Smokehouse in Winter Park, where 4 Rivers announced its new “Shine A Light” fund, to debut on Dec. 2 at all of its locations.

Guests can choose to opt out of participation if they so desire, but 4 Rivers and The COOP are matching 100 percent of the 1 percent donations. tweet this
"None of this would have been possible without the support of our amazing guests, who share our commitment to community and helping those in need," said John Rivers, founder and CEO of 4R Restaurant Group.

The "Shine A Light" fund will basically add a 1 percent donation checks at 4 Rivers Smokehouses and the COOP starting on Monday, Dec. 2. The funds will be directed to "helping feed people in need due to economic hardship or natural disasters."

The money collected will to organizations such as World Central Kitchen, Second Harvest Food Bank, and 4Roots Farm Campus, whose mission is to build a healthier and more sustainable food system in Central Florida.

Guests can choose to opt out of participation if they so desire, but 4 Rivers and The COOP are matching 100 percent of the 1 percent donations.

4 Rivers Smokehouse was established in Winter Park in 2009 as "a family-owned Barbecue Ministry." The name of the fund was inspired by the bible verse Matthew 5:16, "in which Jesus challenged believers to shine their light by helping others," said Rivers.

4 Rivers Smokehouse currently has 14 operating locations spanning Florida and Georgia. The COOP is a neighborhood restaurant in Winter Park owned by the company.

“Thanks to 4R Restaurant Group and others, we have been able to cook and deliver over 1.5 million meals in the Bahamas,” said World Central Kitchen executive director Nate Mook.