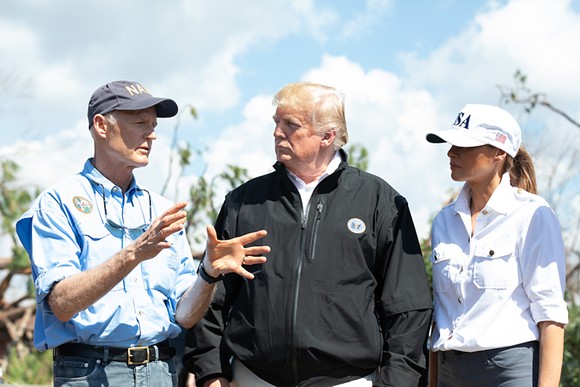 Trump said on Twitter Thursday that moving residency "will be best for all concerned."

"As President, I will always be there to help New York and the great people of New York," Trump wrote. "It will always have a special place in my heart!"

Upon hearing the news, first reported in the New York Times, New York Gov. Andrew Cuomo didn't hold back, saying in a statement, "Good riddance. It's not like Mr. Trump paid taxes here anyway. He's all yours, Florida."

A source told the Times that Trump's decision to move his permanent residence was motivated by Florida's lack of state income tax or inheritance tax. Donald Trump Jr. already shot back at Cuomo's comments, tweeting, "Nice soundbite. Now do the tens of thousands of other successful New Yorkers and businesses fleeing your idiotic policies every week. I’ll wait."

Donald Trump won't be able to avoid investigations back home, as the Manhattan District Attorney's Office is still working to obtain his tax records.

1600 Pennsylvania Avenue, the White House, is the place I have come to love and will stay for, hopefully, another 5 years as we MAKE AMERICA GREAT AGAIN, but my family and I will be making Palm Beach, Florida, our Permanent Residence. I cherish New York, and the people of.....

The Times noted he "bankrupted his businesses six times, and drew cheering crowds and angry protesters to Fifth Avenue after his election," while becoming "intertwined" in New York life.

USA Today noted Trump's New York ties go back generations, reporting "the Trumps have been New Yorkers since 1885, when Trump's grandfather immigrated from Germany to the United States at the age of 16."

The move comes after Florida had finally emerged from our status as the most politically corrupt state in the nation. In September, the anti-corruption nonprofit Coalition for Integrity released its annual report, known as the S.W.A.M.P. index (States With Anti-Corruption Measures for Public officials), stated that Florida leads the nation in ethics transparency laws.

Most Floridians know and love New Yorkers who have moved here, if they aren't a native knickerbocker themselves. Still, these newest arrivals seem more ominous than most.