Trailblazers is a new concert series curated by star rapper and tireless Orlando scene impresario Swamburger, and this fifth edition was a roundup of some fresh talent.

Kicking off the night was local (by way of Detroit) MC the Spec-ILLest. Informed by rap’s textbook gospel, he’s a strict hip-hop constructionist with cadence that’s coiled, classic and on rails.

Co-headlining was Orlando’s Sean Shakespeare, a Second Subject upcomer and one of Swamburger’s top young protégés. He’s long been an expressive and versatile rapper, but this latest performance showed a deepening presence, a growing aura of substance that needs no bullshit braggadocio. Artistically, Shakespeare manages the nice feat of passing the technical muster of classic hip-hop rigor while maintaining a very now voice, straddling the true and the new with natural command.

The touring headliner was the Vapor Caves, an Austin band just coming off a live session at the downtown library’s excellent Melrose in the Mix series. On stage, the creative core of singer Yadira Brown and producer BoomBaptist come with the kick of live drummer Sam Wood. Together, they work a smooth brew of R&B and electro-funk with pop smarts, hip-hop edge and an ‘80s jones.

Between the two leads, she brings a voice of immaculate soul cream and he brings the soft, neon grooves with a talk box and – oh shit, ya’ll – a muhfuggin’ flute too. And, all told, it was a performance of breeze, fun and levity. 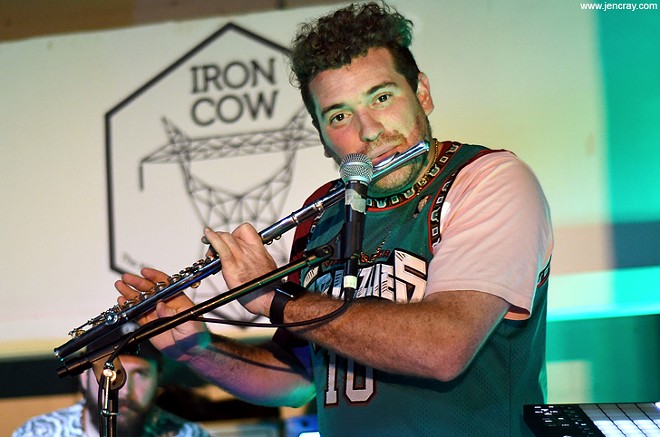