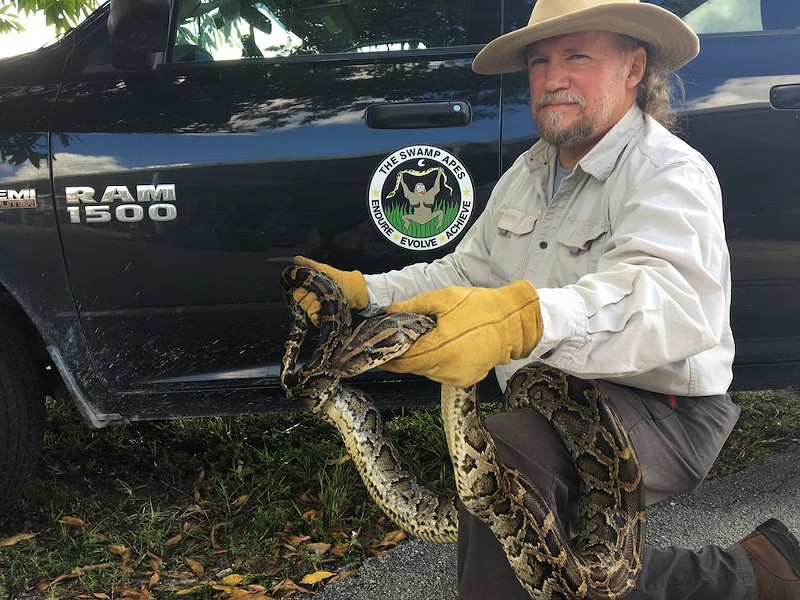 The state of Florida has been invaded. No, not just by Wawa gas stations and tax-dodging New Yorkers moving in, but another environmental threat: the Burmese python.

The Florida Fish and Wildlife Conservation Commission announced Monday it has removed 1,000 invasive Burmese pythons from the Everglades. The removal comes after the South Florida Water Management District removed 2,600 pythons earlier in the month, marking the grand total of 3,600.

.@MyFWC’s Python Action Team has removed its 1,000th Burmese python from the Everglades - this is in addtion to the 2,600 pythons removed by the @SFWMD’s Python Elimination Program. In total, more than 3,600 pythons have been removed.

“Governor DeSantis brought new energy and bold leadership to Florida’s python program,” said SFWMD Executive Director Drew Bartlett. “We join our partners at the Florida Fish and Wildlife Conservation Commission and Everglades National Park in celebrating more than 3,600 pythons removed from the Everglades. Together, we’re all working to restore the Everglades and combat the harmful pythons that hurt Florida’s native wildlife.”

Burmese pythons are originally native to southeast Asia, and can grow from 16 to 23 feet. To put this recent accomplishment into perspective, 3,600 adult Burmese pythons lined up from end to end would be roughly 11 miles of snakes – talk about a slough of serpents. One female can lay as many as 100 eggs, creating a potentially catastrophic problem for the largest subtropical wetland ecosystem in North America.

Python Action team to the rescue. Established in 2017 to combat the rise in the invasive species, the team consists of hunters, anglers, and outdoor enthusiasts. Team members are paid an hourly wage by the FWC but can make up to $200 removing a python nest. Members also are given $50 dollars for pythons measuring up to four feet and can receive $25 for each additional foot.

The team’s 1,000th python was captured by Tom Rahill and the Swamp Apes, a group dedicated to serving U.S. veterans through serving the wilderness. The snake measured in at 9 feet, 5 inches long and weighed 23 pounds.

"The dedication of Tom Rahill and the veterans of the Swamp Apes is commendable," said Pedro Ramos, superintendent of Everglades and Dry Tortugas National Parks. "Not only do their consistent efforts remove countless invasive snakes, but the captured pythons also provide our biologists and our USGS partners opportunities for research so that we can seek new methods to control their population."
To learn more about FWC’s Python Action Team visit the SFWMD’s Python Elimination Program webpage.