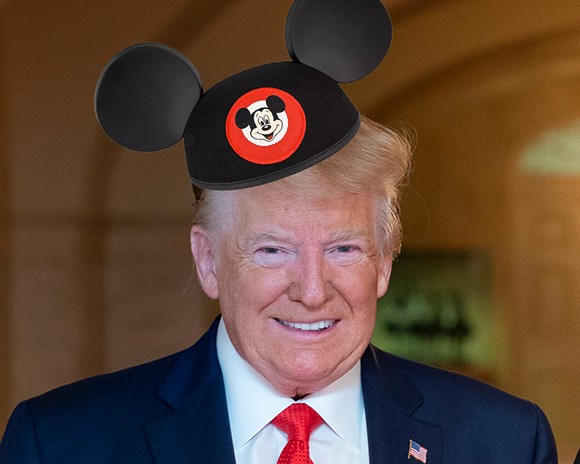 Next month, President Donald Trump will visit Walt Disney World to speak at a private fundraiser held at the Grand Floridian. Other than the impeachment cloud that surrounds him, this will not be new ground for Disney.

Nearly every president since Harry Truman – with the sole exception of Lyndon B. Johnson – has visited a Disney park at some point in their life, and every single sitting president since Nixon has made a visit to WDW while in office.

Trump's speech at the Republican Party’s Dec. 7 Statesman’s Dinner, will be the Grand Floridians' second time hosting a sitting president. George W. Bush visited the hotel in 2003. In 2006, W. returned to WDW for a visit to the Contemporary Resort.

Obama’s 2012 speech on Main Street in the Magic Kingdom is by far one of the most memorable. The speech, before an invited audience, was focused on the travel industry’s role in America’s economic recovery, so the castle backdrop was a fitting location.

The short-lived Disney Institute, an educational resort where Saratoga Springs is now located, saw plenty of celebrities (it was a favorite of Whoopi Goldberg), but the most famous celebrity had to be Bill Clinton, who visited the resort in 1996.

George H.W. Bush visited Disney World twice while president, the first time in 1990, but it was his second visit in 1991 that is the most memorable. During that visit, he gave a speech at Epcot for the first ceremony for the 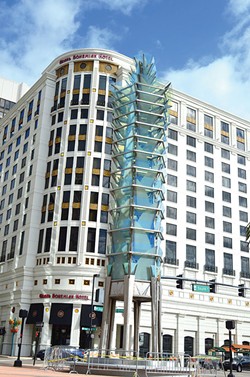 Points of Light volunteer program. During that visit, Bush encouraged cities to become “points of light” by encouraging citizens to volunteer.

Orlando quickly took up the call, becoming “America’s First City of Light,” as its welcome signs once proclaimed. Orlando Mayor Bill Frederick and Walt Disney attractions chairman Dick Nunis oversaw the volunteer push in Orlando, as co-chairs of the city’s City of Light program. The designation was honored the following year with a sculpture in front of City Hall. The Tower of Light, better known to locals as "the giant asparagus," remains to this day.

Like both Bushes, Regan visited the resort twice, both times with stops at Epcot. In 1983, just a few months after Epcot’s grand opening, he gave a speech to the international students working at the park. Regan, who in his acting days had co-hosted Disneyland’s grand opening coverage for ABC, returned to Epcot in 1985 for a second-term inaugural celebration that included a special parade around the World Showcase.

A 1978 speech by Jimmy Carter inside the Magic Kingdom for the 26th World Congress of the International Chamber of Commerce was the first Walt Disney World park visit by a sitting president. That distinction of park visit instead of resort visit is the one typically cited by Disney when discussing presidential visits.

That would mean Trump’s upcoming visit to the Grand Floridian could be better ignored by Disney. Ironically, this specific wording helps Disney ignore another president that has much in common with Trump. It was Nov. 17, 1973, when Richard Nixon spoke at an Associated Press Managing Editors annual conference, hosted in the convention center at the Contemporary Resort. It was here that he delivered his infamous “I am not a crook” remarks. Less than a year later, he resigned.

No word on yet if Trump plans to make any remarks on his possibly criminal behavior but, like Nixon, maybe his visit to Walt Disney World will eventually be a footnote in the story of his resignation. He might even find inspiration from John Lennon – who while staying at the Polynesian Resort, signed the papers officially ending The Beatles – and decide there’s no better time than now to resign. Disney World is just two and a half hours away from his favorite bedbug-free resort (and now official post-presidency home), Mar-a-Lago.