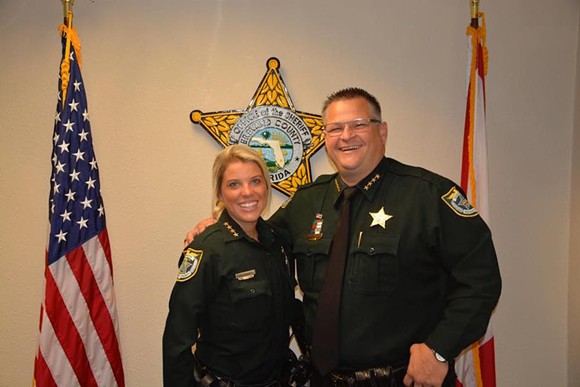 "They have a better chance of me waking up thin tomorrow morning than they do of me taking that motto off our cars," said Brevard County Sheriff Wayne Ivey to Fox News in response to a request to remove "In God We Trust" decals from patrol vehicles.

You may recognize the husky fuck from other despicable wastes of time while in uniform, like his outrageously degrading Facebook video series, "Wheel of Fugitive." Or another video giving the asinine advice that, should the horror of an active shooter befall you, it's best to stay and fight the terrorist.

Well, Ivey's back, this time to callously insist that he is right and everyone else can go kick rocks.

In a Brevard County Sheriff's Facebook post, the office announced "In God We Trust" and American Flag decals would be added to new patrol cars as the agency replaces its fleet. The idea came from a citizen, described as "a very proud veteran." The "patriotic graphics ... show just how proud we are of our country and the principles our great nation was founded upon," said the Oct. 27 post.

On Oct. 30, Annie Laurie Gaylor, co-president of Freedom From Religion Foundation, a Wisconsin-based nonprofit "committed to the cherished principle of separation of state and church," wrote a statement urging Brevard County do away with the "In God We Trust" decal.

“Spending taxpayer time placing religious messages on patrol cars is beyond the scope of secular government,” said Gaylor. “Further, in a time when citizens nationwide are increasingly distrustful of law enforcement officers’ actions, it is frightening and politically dubious for the local police department to announce to citizens that officers rely on the judgment of a deity rather than on the judgment of the law.”

Oh, and, the statement points out, there's that whole church and state thing designed to protect all religions and freethinkers. I'm pretty sure that was a super foundational American principle, not hot takes from Martin Luther punching up at the Vatican.

"FFRF is urging the sheriff’s department to remove 'In God We Trust' from all office property in order to protect the conscience of all citizens," Gaylor continued.

That "all citizens" part doesn't appear to really work for Ivey.

In another peculiar move, in an official capacity, he responded to Gaylor and the FFRF on this local issue, not with another folksy Facebook post but an interview with Fox News. There he dismissed any argument for removing the decal, essentially telling anyone and everyone who might object to just go fuck themselves.

"I personally believe that our country is at a tipping point, and if we, as strong patriotic Americans, don’t stand for the principals of our great nation, we are going to lose the America we all know and love," said Ivey.

For Ivey, the motto "In God We Trust" is patriotic and ceremonial – even when it's on government property or festooned by tax-funded government workers. And though it literally says "God," Ivey says this does not mean the government is sponsoring religion.

Having the motto on money and government buildings and cars is like sticking a Magic decal on such things. It's saying the people who work and operate those things, like government jobs or cars or guns, are on the Protestant/Christian team. Yet, religious messaging is not an insignificant bit of sporting pride. It makes clear what kind of people and beliefs are acceptable, even in what's supposed to be the neutral safety of American governance.

By denying and condescendingly swatting away the suggestion he should make all of his constituents more comfortable, Ivey is telling everyone who doesn't fit the Protestant/Evangelical mold to sit and spin, effectively turning "In God We Trust" on Brevard County patrol whips into a middle finger.

Ivey has become a conservative caricature, enjoying a county sheriff's salary and protecting it by maintaining a very white, Evangelical status-quo. The TV channel A&E seemingly thought him to be a character too, according to Ivey, who says he was in talks with the station to bring his "Wheel of Fugitive" from Facebook to cable TV.

A&E is after all, the network that brought us Duck Dynasty, another lowlight of profitably shameless assholery.