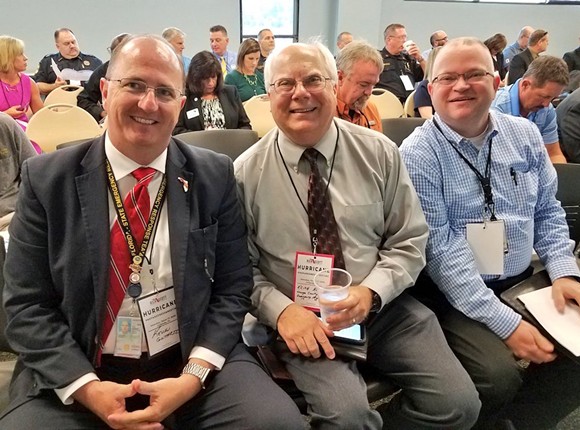 Orange County released the probe, revealing allegations by fire and emergency staffers that Kotch consistently said inappropriate things at work, like telling a woman employee she was a "diva bitch," and getting the attention of a black staffer by saying, "Hey, boy."

Kotch stepped in after the unexpected death of incumbent Emergency Manager Ron Plumber.

But also, according to some witnesses listed in the investigatory report, he spouted wildly demeaning comments.

The woman whose accusations top the list said she walked into Kotch's office to talk about a training program she had completed, which prompted Kotch to call her a "diva." The staffer replied to Kotch that she is not a diva.

"Well," the staffer alleges Kotch said, "then you are a diva bitch."

The same staffer, who is Hispanic, said Kotch told her to "speak English," to slow down when she talks, and that her accent made it hard to understand her when she spoke quickly. Another comment came in a meeting, says the staffer, just as she was directing a group on where to find the definition of a vulnerable population.

When county investigators asked Kotch to define the word "bitch," he said it meant "female." tweet this
"You as a low county employee, what gives you the right to define it?" the staffer says Kotch said to her, as well as a comment about her being a "low-class employee."

The staffer did not file a complaint, and in the county investigation said she would not have said anything at all, had someone else not filed a complaint. She doesn't know who did. She also made it clear that Kotch never touched her.

She said, however, his comments "shook" her confidence and made her less likely to speak up while working on projects. Ultimately, she said she hoped everyone could learn from the experience and move on.

The probe noted that, in the end, the staffer resigned.

The Black employee who claims Kotch said to him "hey, boy," a well-worn term used to belittle Black men, also didn't report the comment. The Black employee and two other witnesses reported that Kotch, while looking at a sign hung some 20 feet above the ground, said that the sign was "tall enough to hang a noose off of."

"I don't want to be the only Black guy to come out and say something like that," said the witness in the probe about making a formal complaint.

He also said he heard about the "diva bitch" comment and wasn't surprised because Kotch once said he'd prefer "a shop with no women."

Multiple witnesses said they did not hear any inappropriate comments from Kotch and that he was a good manager put into a tough position as the interim boss. A few even said he was a bit of a pushover with subordinates.

Witnesses in the probe are Orange County emergency employees ranging from support staff to firefighters.

Also, according to multiple witness testimonies in the probe, another staffer responded to Kotch by telling him to be careful because people get fired for saying such things.

One staffer who heard the "noose" comment said he believed it wasn't racially motivated.

Kotch said he didn't say the noose comment, that perhaps the three people who confirmed he said it misheard him say "is this a new sign." He first denied he said the "hey, boy" comment – then said that he did say it, and acknowledged it was inappropriate, but that it wasn't directed at staff.

Kotch claims he maintained a friendly working relationship with the woman who accused him of calling her a "diva bitch" and a "low county employee." He didn't deny making either comment but said they were said in harmless jest.

He said he called her a "low county employee" as a joke, in reference to her making a request for a large monitor. Kotch did say the comment was "wrong and in poor judgment." The "diva bitch" comment was also a lark about her being "high maintenance," he said, adding that he didn't directly call the woman staffer a "diva bitch," but referred to her request for a large monitor as something "that's like a diva bitch."

He also said he does not recall, but cannot deny, that he said he'd like a "shop with no women," because he claims to have had issues with women staffers that he didn't have with male staffers.

He said women staffers had setbacks that he didn't typically see from men, like women saying "I didn't sleep well last night," and issues with attendance that he had "to accommodate."