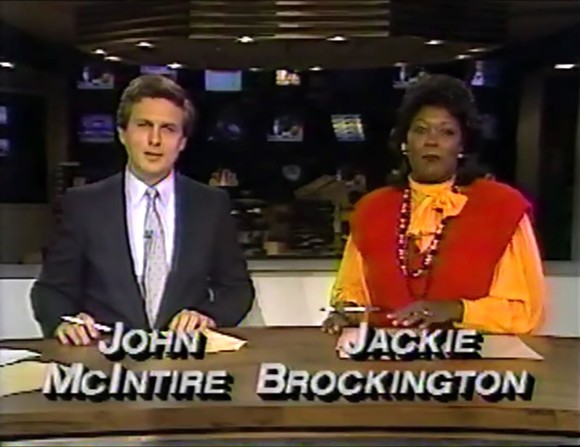 Will the president of the United States fire any of his cabinet members over an illegal foreign-arms deal? Will a Florida kidnapping fugitive wanted for robbery and a murder in North Carolina ever be located?

These and other breaking news stories were resolved more than 33 years ago, but you can relive the excitement in this newly released video of WESH Channel 2's nightly broadcast from Nov. 11, 1986. The broadcast was anchored by John McIntyre and Jackie Brockington, who later went on to anchor the Channel 13 news from 2001 to 2017. It's an incredible time-machine view into the past – and a weird reflection on our present.
Included in the coverage is a man arrested with gasoline bombs in Brisbane, Australia, where he intended to kill Pope John Paul II for having "too much money," and a local plan to clean up Orange Blossom Trail, which included a proposal to create a special taxing district. If approved, the plan would "clean up the trail" by charging area businesses $10 for every foot abutting the roadway.

What's remarkable about the footage is just how many of the stories mirror the current events of today. Yes, O.B.T. still has a long way to go toward serving nearby vulnerable populations, including sex workers, but other social issues stand out, as well.

Working parents were calling in sick to care for their sick children, something the city of Orlando said then cost "a quarter of a million dollars a year in sick pay." Though "several hundred daycare centers" were expected to open in the Orlando area in the coming months, the city was asking for more area businesses to provide child care for their workers.

Our favorite might be medical reporter Sam Dick, who demonstrated ways to save a choking child. For the story, he spoke to Dr. Henry Heimlich, who said "the Heimlich Maneuver may not work the first time, but it's 100-percent effective by the third try." Heimlich died in 2016, but his advice is still saving lives.

The Orlando International Airport was about to open 3,000 new parking spaces the next day, with overnight rates set at $3 per day until a January increase. Meanwhile, archeologists in Titusville found an ancient cemetery with more than 100 bodies at the bottom of a pond, in a new development called Windover Farms.

The commercials are also included in the broadcast. Ads for Kemper Mutual Funds and Gooding's grocery store are like ghost voices from long-defunct companies gone by, but many of the advertisers are still around.

The Central Florida International Auto Show was featuring "KITT," the car from Knight Rider, which had just aired its final episode in April of that year. Volvo advertised their new "On Call" service, where drivers could reach a live operator, 24-7, from their car. Pizza Hut was still slingin' their pan pizza, and Walgreens was advertising Christmas gifts like Whitman's Sampler. In a commercial for Fashion Square Mall, a child claimed it's the best place to see Santa, calling it "the first place to look for Santa's smile."

There's too much to describe here, but it is totally worth a watch today, especially if the actual local news has been bumming you out. It's comforting to know that, while the news – and fashion – are constantly changing, how we see it on the evening news has strangely endured.