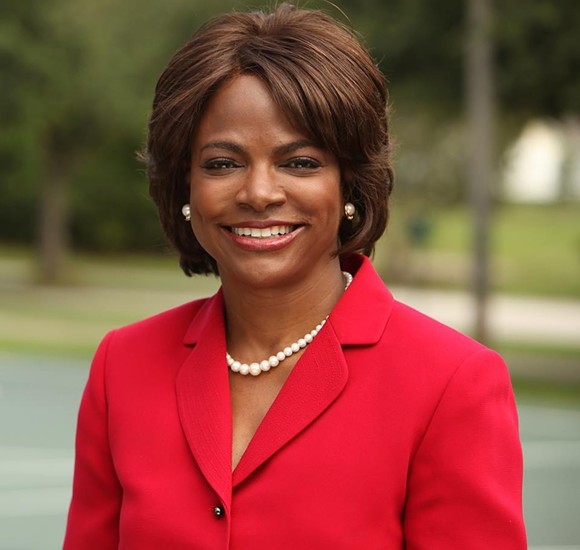 In these trying times for Donald Trump, staring down an impeachment inquiry into his alleged inappropriate dealings with foreign powers, Florida has been a safe haven.

He announced he was moving his permanent residence to the Sunshine State. South Florida is home to his beloved Mar-a-Lago Club and golf course. Gov. Ron DeSantis is one of his chief sycophants. And Trump has turned to former Florida Attorney General Pam Bondi to join his impeachment team and help with messaging.

One Florida politician isn’t helping Trump at all: Congresswoman Val Demings, who represents Florida’s 10th district that covers parts of Orlando, Winter Garden, Oviedo, Windermere, Ocoee and Eatonville. She is on the House Intelligence Committee holding open impeachment hearings that started today. She is the only person from Florida on the 22-member-committee made up of 13 Democrats and nine Republicans.

The Mandarin native and first woman to be Orlando Police chief – who is also on the House’s Judiciary Committee – is tasked with pro-impeachment messaging and questioning witnesses.

Commenting to Al Sharpton on MSNBC today, Demings said the first round of testimony was damning, especially from those on the infamous Ukraine call.

“You clearly understand that the president tried to use his power to try and coerce a foreign power for political gain,” she told MSNBC.

Some of today’s testimony was private, but will be released later. On Twitter, Demings posted an exchange from the public hearings regarding Trump’s former attorney Rudy Giuliani in which she asked if, under Trump, Giuliani was “promoting U.S. interests.”

Rep. Demings: "Was Mr. Giuliani promoting US national interests or policy in Ukraine?"

Demings: What interests was he promoting?

Kent: I believe he was looking to dig up political dirt against a potential rival. pic.twitter.com/R4LchphJYW

Both witnesses said no.