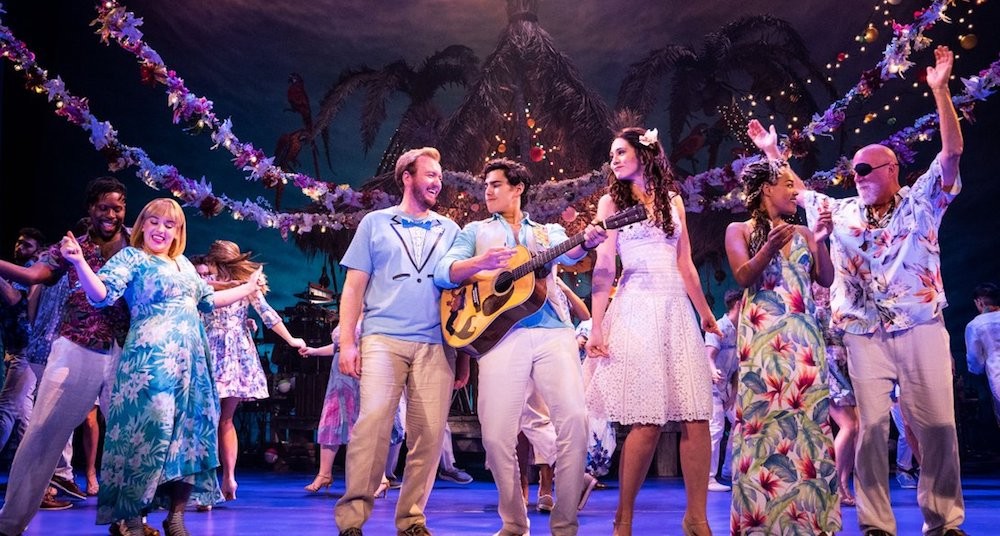 Escape to Margaritaville tells a cautionary tale of Northerners who depart their snowy homes for the island resort memorialized in Jimmy Buffett’s songs, only to face molten lava, broken engagements and tap-dancing zombie insurance salesmen.

If only they’d simply been sensible Parrotheads and vacationed in Orlando — home to not only a Margaritaville restaurant, but a resort hotel with attached water park – they could have saved themselves some serious heartache, if not heartburn (those Volcano Nachos are a killer). But then, we would have gotten this jukebox tuner, which took a brief bow on Broadway last year before embarking on the non-Equity tour that’s currently parked at the Dr. Phillips Center through Nov. 17.

Type-A environmental researcher Rachel (Sarah Hinrichsen) whisks her bachelorette BFF Tammy (Shelly Lynn Walsh) out of Cincinnati for a week of boozing in the sun, with a bit of soil sample collecting for her potato power project on the side. She swiftly falls for Tully (Chris Clark), the local Lothario lounge singer, while her gal pal toys with ditching her loutish fiancé, Chadd (Noah Bridgestock), in favor of soft-hearted bartender Brick (Peter Michael Jordan). J.D. (Patrick Cogan), a perpetually soused single-eyed septuagenarian heir, and Marley (Rachel Lyn Fobbs), the gossipy innkeeper, round out the star-crossed couples whose relationship issues erupt along with the island’s previously-dormant volcano.

The best thing that can be said in Escape to Margaritaville’s favor is that its youthful cast – several of whom are straight out of school – invest in the material they’ve been given with as much enthusiasm as could be asked for.

Clark, whose bare centaur-like chest may be the show’s best scenic effect, softens Tully’s insufferable cockiness with his silky smooth tenor. Hinrichsen is charming and believable as the brainy big-city scientist, until she sings with an inexplicable backwoods country twang. The supporting cast each gets a brief moment to shine, especially the spunky Walsh, whose deliciously loony “Cheeseburger in Paradise” dance extravaganza (choreographed by Kelly Devine) was opening night’s second most surreal sight, just behind the patron sitting in the front row who came dressed as a burger.

That type of imagination is sorely lacking in most of this by-the-numbers show, whose creative team is capable of better. The script by Greg Garcia and Mike O’Malley (TV’s My Name Is Earl) awkwardly shoehorns Buffett song lyrics into tired rom-com tropes, cobbling together a paper-thin plot that the Hallmark Channel would reject as overly formulaic. Christopher Ashley’s direction (as re-created by Amy Anders Corcoran) is briskly paced and sprinkled with some sly sight gags, but there’s no room (or requirement) for much emotional nuance, and when the show does finally slow down for a sentimental moment it feels forced.

Paul Tazewell’s Lilly Pulitzer-flavored costumes provide steamy eye candy, but Walt Spangler’s scenery seems mostly scavenged from a Hobby Lobby faux foliage sale. Even the onstage orchestra, which appears to be having a lot of fun, sounds like a second-rate Coral Reefer cover band, no thanks to a surprising anemic sound mix; despite sitting directly in front of the speaker stacks, I never felt the sonic energy of a rock & roll show, even when a beach ball smacked me in the face during the audience-participation finale.

At intermission, I made a beeline for the bar to down a signature margarita. It was overpoweringly sweet with an unpleasant underlying sourness, and while it did its job of dulling the pain for an hour or so, I was left with a slight headache. That makes this cocktail a perfect metaphor for its namesake musical, which convinced me once and for all that Margaritaville is a place I want to escape from, not to. If you see this show and still want to waste away there, all I can say is, “OK, Boomer.”