Readying to launch, Epcot's new space-themed restaurant still has no one at the helm 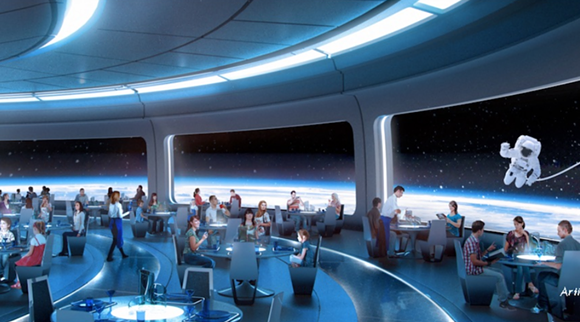 Epcot is already known for its global cornucopia of unique dining experiences, but their latest addition, just months ahead of opening, has hit a speed bump.

The World Showcase has been the anchor of Epcot's foodie offerings, something that Disney has ensured continues with a new fine-dining Japanese restaurant, but Future World – or the area formerly known as Future World – is continuing to hold its own. Future World already has the often-overlooked Coral Reef restaurant with its dramatic views into The Seas aquarium but attached to the Mission: Space pavilion is the soon-to-open Space 220 restaurant.

Much like the aquarium views offered at Coral Reef, Space 220 has huge "views" of space, thanks to a cutting-edge curved screen that envelopes the dining room. While the view will surely be the talk of many who visit the restaurant, that is named after the height at which it sits above the earth at 220 miles, like all restaurants the food itself will also be important.

He was no stranger to Patina. Schoenegger received a Michelin star while serving as the executive chef of Patina’s restaurant at the Walt Disney Concert Hall in Los Angeles. Under his helm, Patina also received a highly prestigious Relais & Châteaux rating, one of fewer than 100 standalone restaurants worldwide to be on the list.

It was announced in September that Schoenegger would be leaving Disney World, which, like Florida in general, food critics are known to snub. He would be returning to his old gig at Wynn Las Vegas, a more likely location for critical acclaim. Since then, Patina Group has been silent on just who they plan to replace him.

In the meantime, rumors of less-than-ideal sales at their Disney Springs restaurants, sans Morimoto, have been sending ripples throughout social media. While many expected STK – the steakhouse infamous for its excessively loud music and nightclub-like vibe – to be the first new dining establishment at Disney Springs to close, but some quick changes early on seem to have saved it, at least for now.

The possibility these restaurants are struggling might explain why Patina has opted to not move one of their existing chefs to the new, high profile Space 220 restaurant. tweet this
More recently the lack of positive social media coverage of Patina’s Disney Springs restaurants has some thinking those might be the first to receive updates. Despite promising but mixed early reviews, many of Patina's Disney Springs restaurants still seem like a mixed bag. The Edison has only a 3.5 rating on Yelp, TripAdvisor, and Google. Maria and Enzo's shares the same rating on Yelp, and only a slightly better 3.8 on Google. Pantina has supposedly also seen some recent hiccups at L.A. version of The Edison as well, though those employment based issues seem far less severe than the sales issues rumored in Orlando.

The possibility these restaurants are struggling might explain why Patina has opted to not move one of their existing chefs to the new, high profile Space 220 restaurant, instead searching for an executive chef outside of the company despite the restaurant being only a few months, at most, from opening. The "Winter 2019" grand opening is not likely to happen, considering construction is still ongoing for the custom-built venue.

For now, Space 220 is rocketing towards its grand opening with no official opening date, no idea on who will oversee its kitchen, and, if social media is to be believed, possibly no future for its sister restaurants.