A homeless woman locked herself inside a Florida Walgreens to keep warm overnight, and WKMG finds that pretty 'strange'

A homeless woman remained inside a closed Daytona Beach Walgreens overnight to keep warm, and WKMG Channel 6 thinks it's all pretty weird.

Police arrived on the scene soon after alarms went off around 5 a.m. Wednesday, to find 49-year-old Valorie Phillips Hannigan smoking a cigarette in the woman's restroom, while eating food she heated up in the microwave of the employee break room.

Despite reporting that Daytona Beach police believe the woman intentionally hid in the store "because she is homeless and the temperatures were in the 50s," WKMG rolled it out as a "Strange Florida" segment, with anchor Matt Austin introducing it as a "strange story from Daytona Beach."

Reporter Loren Korn was on the scene at the Beville Road store, and her report included body cam footage of officers apprehending Hannigan, as well as showing the woman's mugshot. She ended her segment with the sign-off, "Loren Korn, getting results, News 6."

It's not clear what results were achieved by showing a homeless woman's arrest and mugshot on TV, but the segment probably attracted a lot of viewers.

It's certainly a troubling situation for law enforcement and the store managers involved, but the real story is the lack of sustainable housing options for homeless people within the coastal community, especially when there aren't enough safe places to stay when temperatures drop. The Daytona Beach News Journal reported last month that city commissioners were worried about a new project by First Step Shelter to include an outdoor "safe zone," where homeless people facing arrest for minor crimes could stay overnight in relative safety. Despite the planned area being little more than a fenced-in portable restroom surrounded by undeveloped city land near the Volusia County Branch Jail, City Commissioner Rob Gilliland stated he was "wholly opposed to it" on Oct. 16. "It is something that is very disturbing to the people on the west side of town that this could possibly happen," he said.
It's not clear what results were achieved by showing a homeless woman's arrest and mugshot on TV, but the segment probably attracted a lot of viewers. tweet this
After deliberating for months, the Daytona Beach City Commission finally voted to let the group proceed with planning the outdoor area, ahead of a 90-day trial period.

When the First Step Shelter building is completed in mid-December, it will house 45 beds for adults. Nearby Halifax Urban Ministries in Daytona can provide cold weather shelter for up to 481 people overnight, with another 95 families able to stay for several months.

When First Step operations manager Bill Bernardo wanted information on how quickly the 45 shelter beds and safe zone could fill up, he asked Volusia County Judge Belle Schumann. She counted 64 homeless people in court over a five-day period, or just under 13 people a day. Most of those arrests were for trespassing, theft, open alcohol containers, and possession of drug paraphernalia. 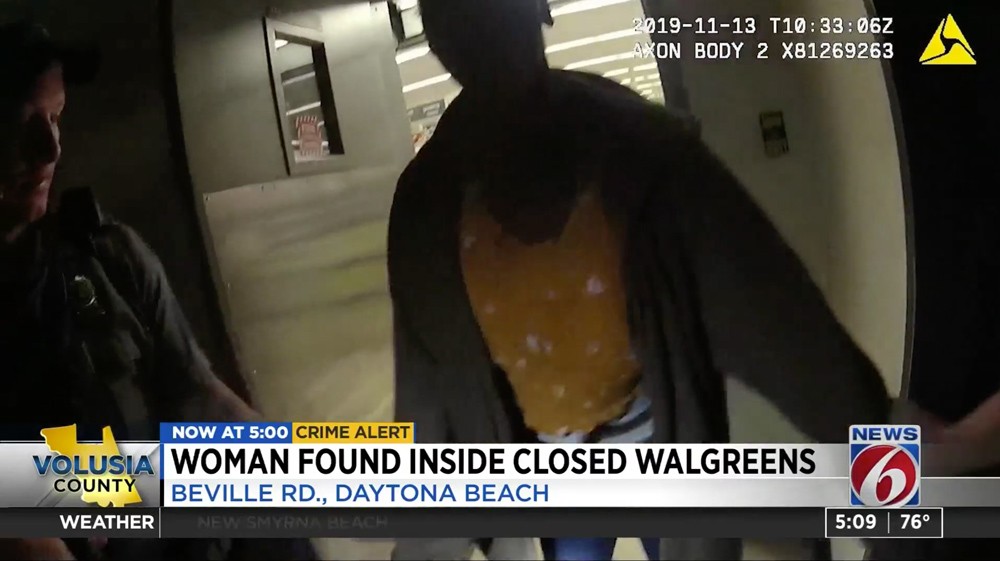 The WKMG report included Daytona Beach Police public information officer Messod Bendayan, who said, "that’s unfortunately reality for a lot of people who are out on the streets. When the temperatures are cold, they’re just trying to find shelter any way they can."

WOFL Fox 35 news also covered the arrest, describing her as "a woman who tried to have a sleepover inside a Walgreens." Their report also included the mugshot and body cam footage, noting the story was "shocking and strange."

Hannigan is not suspected of stealing anything, and was arrested on a charge of unarmed burglary.

Fox 35 interviewed one Daytona Beach resident who called the story "really crazy,” before asking the reporter, "what is the world coming to that people are sleeping in stores? You know? They should do something for people on the street."

Yes, they really should.