DeSantis' new bonus scheme for Florida teachers would cap out at $7,500 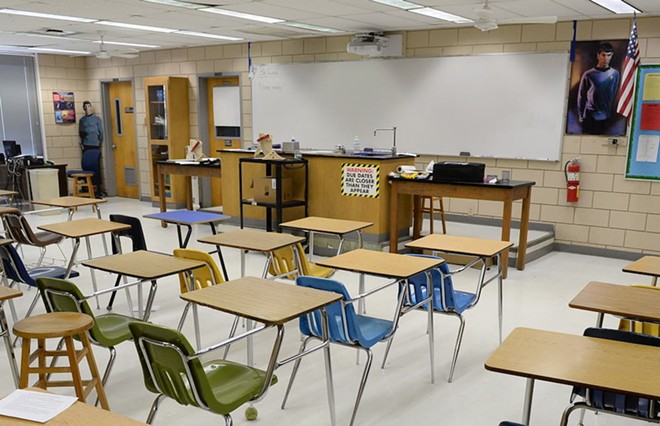 Gov. Ron DeSantis wants the Florida Legislature to abandon the embattled “Best and Brightest” bonus program and replace it with a new plan to offer bonuses to public-school teachers and principals.

The governor said Thursday his proposed bonus program aims to provide incentives to teachers and principals to work at schools in low-income areas. He said he will propose spending $300 million on the program.

“We think this is an improvement on the Best and Brightest program,” DeSantis said at a news conference in Vero Beach.

DeSantis said his plan would provide bigger bonuses to teachers and principals who work at Title I schools, which serve the highest percentages of students living in poverty. Bonuses would be based, at least in part, on gains that schools make in the state’s school-grading calculations and would be up to $7,500 for teachers and up to $10,000 for principals.

“I think that it is going to be something that will reward those folks who are working on behalf of students,” DeSantis said, “but also do it in a way that recognizes there are certain schools that have a need to have great teachers.”

But the proposal met immediate criticism from the Florida Education Association. The statewide teachers union has long pushed for salary increases rather than bonuses, arguing that higher salaries would bring more long-term financial stability for teachers.

“Our educators do not want another bonus scheme, especially not one built on the back of a flawed school grading system," FEA President Fedrick Ingram said in a statement Thursday.

The governor has put teacher pay issues at the top of his list of priorities for the 2020 legislative session, which starts in January. In addition to wanting a new bonus program, the governor has proposed raising the minimum salaries for public-school teachers to $47,500, a plan that comes with a $600 million price tag.

"Our educators do not want another bonus scheme, especially not one built on the back of a flawed school grading system," said FEA President Fedrick Ingram. tweet this
DeSantis, who will release a full budget proposal before the legislative session starts, is asking the Republican-dominated House and Senate to improve teacher compensation during an election year. But the request also comes as state economists warn about a possible economic slowdown and a relatively small budget surplus next fiscal year.

When the governor rolled out his plan to increase minimum salaries last month, he said the $600 million package would fit “neatly” within his budget proposal, adding that he did not see the plan as something that is a “pie in the sky.”

The governor echoed the sentiment on Thursday when talking about his proposed bonus program.

“I think we are going to get a lot of support from the Legislature for this,” he said.

Helen Aguirre Ferre, a spokeswoman for DeSantis, told The News Service of Florida the governor has spoken to key lawmakers about the bonus program, saying his pitch should not have come as a surprise. She added that while the “devil is always in the details,” the governor is confident the Legislature will be able to approve funding for both of his proposals.

"If we don’t apply the necessary resources to improve our education system for those students who need it the most, we stand to hurt ourselves in more ways than one," Ferre said.

But it remains unclear how lawmakers would fund the plans.

House Speaker Jose Oliva, R-Miami Lakes, did not immediately respond to requests for comment about the governor’s bonus proposal. But when DeSantis released the plan to increase minimum teacher pay, Oliva offered a cool response.

“I am in receipt of the governor’s statement regarding teacher compensation as I am of the over $2B ($2 billion) of new spending requests from his agencies,” Oliva said.

“The teacher pay salary increase is still very much in place,” Latvala said. “I suspect the House will have our own ideas as well as weighing the governor’s proposal.”

Senate President Bill Galvano’s office also did not immediately respond to requests for comment on the governor’s new proposal, but last month he expressed caution about bonus programs. He said they “are difficult right out of the gate.”

“It’s because of the … local nature of the compensation for teachers, these programs become very difficult to manage at the state level,” Galvano told reporters during an Associated Press gathering at the state Capitol.

The Best and Brightest program, created by the Legislature in 2015, has been beset with controversy.

A report released Wednesday by the Florida Auditor General’s Office said nearly a quarter of the state’s school districts made more than $320,000 in “questioned costs” when distributing bonuses through the program during the 2017-2018 school year.

Auditors did not name the school districts, but they noted the districts’ failure to ensure people were eligible to receive bonuses raised questions about whether $326,048 was appropriately given out.

“It is disappointing that the program wasn’t implemented correctly in certain districts,” Senate Appropriations Chairman Rob Bradley, R-Fleming Island, told the News Service on Thursday, after he had reviewed the audit.

Bradley, who has filed legislation to repeal the Best and Brightest program next year, added he expects the flagged school districts to “make the appropriate corrections.”

Also this month, a federal judge gave preliminary approval to a settlement in which the state would pay $15.5 million to resolve a class-action lawsuit, alleging the Best and Brightest program discriminated against black, Hispanic and older teachers.

The lawsuit was focused on a decision by state lawmakers to partly base Best and Brightest bonuses on teachers’ scores on SAT and ACT college-admission exams. This spring, the Legislature passed a bill that removed the SAT and ACT requirement from the program, something DeSantis pushed after taking office in January.