No, Donald Trump's name will not appear automatically at the top of your ballot 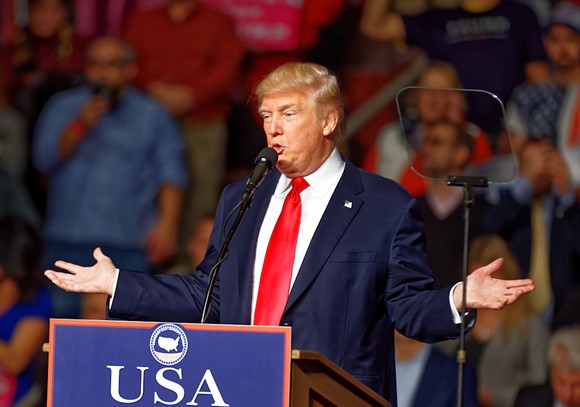 Delivering a victory to Democrats, a federal judge Friday declared unconstitutional a decades-old Florida law that requires candidates who are in the same party as the governor to be listed first on the ballot.

Chief U.S. District Judge Mark Walker ruled that the state law “imposes a discriminatory burden on plaintiffs’ voting rights which is not of the same magnitude as entirely denying plaintiffs the franchise but is not negligible either.”

The effect of being the first candidate listed on the ballot – known as the “primacy effect” vote, the “windfall vote” or the “donkey vote” – is especially meaningful in Florida, where razor-thin margins are common in statewide elections.

“By systematically awarding a statistically significant advantage to the candidates of the party in power, Florida’s ballot order scheme takes a side in partisan elections,” the judge wrote.

The Constitution does not allow “a state to put its thumb on the scale and award an electoral advantage to the party in power” he added.

Florida’s ballot-position law was enacted 68 years ago, when Democrats controlled the governor’s office and the Legislature. tweet this
For example, political scientist Jon Krosnick’s analysis of Florida elections from 1978 through 2016 found that first-listed candidates have historically gained an average advantage of 5 percentage points due to their ballot position, an effect that has less than a 1 percent probability of occurring by chance, Walker noted.

In a state with a “history of election results in which the margin of victory or defeat is less than three to five percentage points,” Walker wrote, the state law has impacted plaintiffs First and 14th Amendment rights “by systematically allocating that small but statistically significant advantage” to candidates of the same party as the last-elected governor.

The judge also found that the defendants’ justifications for the “ballot order scheme” were “weak and entitled to little weight.”

Florida’s ballot-position law was enacted 68 years ago, when Democrats controlled the governor’s office and the Legislature.

But as margins in many high-profile elections have narrowed, who is listed first on the ballot is more important than ever, Democrats argued in the lawsuit.

While the advantage of appearing first on the ballot “is (a) relatively small percentage taken in isolation,” Walker agreed, “the records of Florida’s elections which are before this court demonstrate it is more than the margin of victory or defeat in a great many elections in Florida.”

Walker also acknowledged the ballot order is not the only reason a candidate wins or loses an election.

“But although no single raindrop bursts a dam, and a single small transaction rare is the sole cause of a bankruptcy, the dam still fails and the debtor becomes insolvent. Similarly, candidate name order effects are not the only reason elections are won and lost, but they do contribute substantially to candidates’ successes or failures at the polls,” he wrote.

The ballot order advantage “is a fair-weather friend to the party in power, whichever party that may be, and though its inclination may change depending on the prevailing political breeze it is unquestionably a partisan provision,” and is therefore politically discriminatory, the judge found.

As he has done in other election-related lawsuits, Walker scolded the state for its defense of the law.

“Voters could actually lose confidence in the integrity of Florida’s election system from the knowledge that the order of candidates’ names on the ballot was determined on a partisan political basis rather than a neutral one.” tweet this
“In what has become a familiar exercise for this court in cases concerning voting rights and procedure, defendants throw a hodgepodge of preliminary issues at the wall, hoping one will stick and prevent this court from considering this case on the merits,” Walker chided.

Secretary of State Laurel Lee had argued that the ballot order provision is necessary because it is “upholding the policy choices of Florida duly-elected representatives.”

“If the Florida Legislature adopts an unconstitutional law, Florida’s interest in having made that legislative choice will not render that law constitutional,” he wrote.

Walker also rejected the state’s arguments that doing away with the ballot order law would undermine voters’ confidence in elections, saying he concluded “voters could actually lose confidence in the integrity of Florida’s election system from the knowledge that the order of candidates’ names on the ballot was determined on a partisan political basis rather than a neutral one.”

Walker did not specify what the state must do to replace the current system but ordered that “from the date of this order forward, no ballot shall issue which is organized pursuant to the ballot order scheme” described in the law.

He ordered Lee to employ a county-by-county rotational system “until such time as the state adopts a new ballot order scheme on a permanent basis.”

“Florida may choose to adopt county-by-county rotation, precinct-by-precinct rotation, alphabetical-by-surname listing, or any number of other alternative ballot order schemes which comport with the Constitution,” Walker ordered, giving Lee 14 days to provide “written guidance” to county elections supervisors that the current law is unconstitutional.

The judge also issued a stern warning to the state.

“Compliance with this order is not optional, and this court will not hesitate to use every tool available to enforce its authority and ensure compliance with its orders,” he wrote.