Eight percent of Blacks voted for Donald Trump in 2016. As abysmal as that number is, Trump is determined to get more African-Americans to re-elect him in to White House.

Trump's approach to court one of the most consistently Democratic voting blocs, which his campaign calls "Black Voices for Trump," is through radio and newspaper ads at 11 predominantly Black stations and publications in swing states, including Orlando's Florida Sun and The Westside Gazette in Fort Lauderdale.

He's first upping the Black ante with the aunties. No Black Twitter-targeted hashtags have been reported, thankfully, by a news outlet or a human rights arm of United Nations. Quite puke-ingly, though, Trump's full-page ad in the Florida Sun says Black voters can join Black Voices for Trump by texting "woke" to his campaign.

If a vote for Trump is "woke," then many a detractor accusing him of racism must be mad asleep.

Black voters can join Black Voices for Trump by texting "woke" to his campaign. tweet this
There's no way around it. Of all the politicians making an appeal to a constituency group, few are as skin-crawlingly awkward as Trump and his supporters telling Blacks what a Trump administration is "going to do for them." Even that last sentence sounds almost like a not-so-veiled threat.

Just leaving an event and ran into the type of stuff that makes Atlanta the Twilight Zone at times. This is a real pic. I can't make this 'ish up, smh... 🤔😵😥

In his opening bid, Trump's print ad says "Black voices" thrive in his economy. Nobody wants a voice to not thrive, but bettering the entire Black body would make much more sense.

The advert gets specific, stating Trump invests in historically Black colleges and universities, that he gives "hardworking Americans a second chance through criminal justice reform," that he added over six million jobs, and that he is the reason for the lowest unemployment rate for African-Americans in history.

So, real quick: Black people also go to non-HBCU colleges and those places are already plenty rich. "Hardworking Americans" is a dog-whistle, maybe more like a bullhorn. And low Black unemployment is a trend that oh-so surprisingly began during the Black admini- ... I mean, Obama administration (thanks, again, Obama).

The president also mentions his investments in "urban communities" via opportunity zones, a federal program that gives tax breaks to people who invest in poor areas. But Trump has a tendency to use the program on areas where billionaires live. 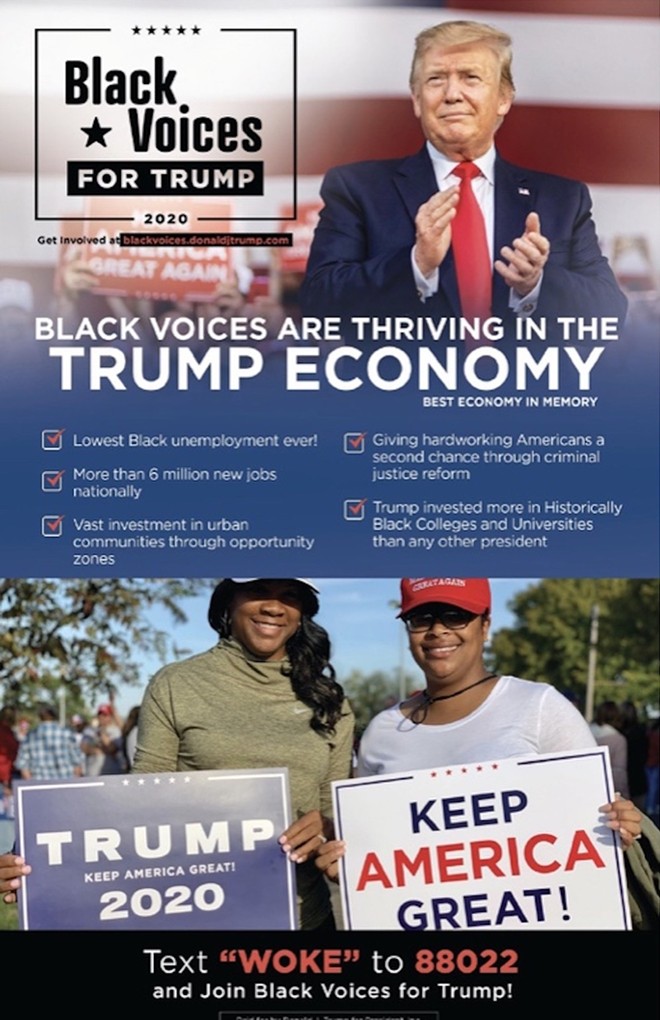