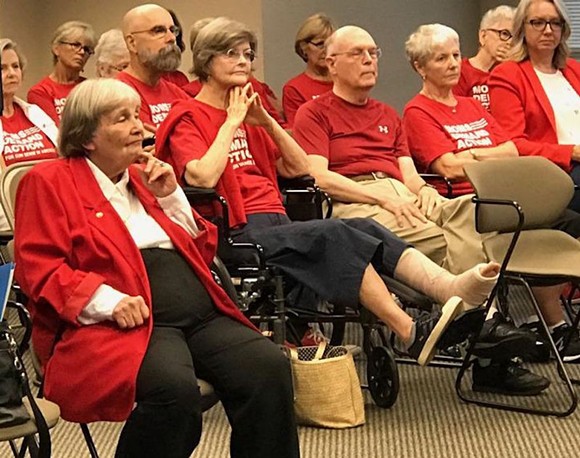 The National Rifle Association has abandoned an effort to keep secret the identities of two young adults in a challenge to a state law raising the age to purchase rifles and other long guns.

The national gun-rights organization filed a federal lawsuit last year, following the passage of a sweeping school-safety law enacted shortly after a mass shooting at Marjory Stoneman Douglas High School in Parkland. Seventeen students and faculty members were slain in the state’s worst school shooting, and 17 other people were injured.

The NRA requested the use of pseudonyms for plaintiffs “Jane Doe” and “John Doe,” two Florida residents who were 19 years old when the complaint was filed in May 2018, based largely on a declaration filed by the group’s Florida lobbyist and former national president, Marion Hammer. Hammer detailed threatening emails she had received.

But the underlying challenge to the age restriction on gun purchases has been on hold for more than a year, after Chief U.S. District Judge Mark Walker decided that previous court rulings forced him to reject the request to keep the plaintiffs anonymous. The NRA asked the 11th U.S. District Court of Appeals to overturn Walker’s ruling on the anonymity issue.

Last week, however, the NRA filed a notice of voluntary dismissal with the appellate court.

“While the petition to proceed under pseudonyms languishes in the 11th Circuit, the primary case to protect the guns rights of adults between the ages of 18-21 sits idle in the lower court,” Hammer told The News Service of Florida in an email early Tuesday.

The “young plaintiffs are aging out” as the pseudonym issue waited for a hearing, Hammer added.

“Rather than continuing to add plaintiffs that could also age out from delays, NRA chose to withdraw the appeal and allow the primary case to move forward. These young adults are old enough to sign contracts, get bank loans, buy homes, go to war carrying a gun and die for our country, so it is egregious, as well as unconstitutional, to deny them their right to buy a firearm,” she wrote.

The NRA asked Walker for anonymity of the young adults due to fear that public exposure could result in “harassment, intimidation, and potentially even physical violence.” tweet this
The controversy over the pseudonyms has been part of the lawsuit filed in March 2018 by the NRA, hours after then-Gov. Rick Scott signed the law that included new gun-related restrictions. The Legislature passed the law just weeks after the Feb. 14, 2018 massacre at the Broward County school.

The law raised from 18 to 21 the minimum age to purchase rifles and other long guns. It also imposed a three-day waiting period on the sale of long guns, such as the AR-15 semiautomatic rifle that 19-year-old Nikolas Cruz —- who was captured on videotape methodically showering students and staff with bullets —- legally purchased a year before the massacre at his former high school. Cruz was arrested and charged with murder.

The NRA contends the age restriction in the new law “violates the fundamental rights of thousands of responsible, law-abiding adult Florida citizens and is thus invalid under the Second and Fourteenth Amendments.” The NRA asked Walker for anonymity of the young adults due to fear that public exposure could result in “harassment, intimidation, and potentially even physical violence.”

But the state argued the request for anonymity “does not provide a sufficient basis for overcoming the strong presumption in favor of open judicial proceedings.”

Suggesting that the courts have not kept up with the times, a reluctant Walker agreed.

The 11th U.S. Circuit Court of Appeals “has made it clear that pseudonyms may only be used in ‘exceptional’ cases … and that there is ‘a strong presumption in favor of parties’ proceeding in their own names,’ ” the judge wrote in a 17-page opinion last spring.

More than two dozen news outlets and media organizations joined the case as “interested parties” in opposition to the NRA’s attempt to shield the identities of the plaintiffs.

Hammer has said she faced threats after the Marjory Stoneman Douglas shooting and filed lawsuits over emails she received.

In the ruling, Hinkle wrote that Sorensen sending the emails “unsolicited to anyone, even a public figure who advocates gun rights, was inappropriate, indeed disgusting.” But the judge said Sorensen did not threaten Hammer and that the emails were protected by the First Amendment.

Sorensen, who works as an arbitrator and mediator, fought the lawsuit and in a court filing argued that the photos “truthfully depict injuries from gunshots.” He also likened the emails to anti-war protests and pointed to the use of photos to inform the public and protest violence dating back to the Civil War.

In February, Hinkle granted an injunction requested by Hammer, banning the two other men from sending any emails to her and ordering the men not to threaten her.

Hammer in June appealed Hinkle’s ruling about Sorenson to the 11th U.S. Circuit Court of Appeals.