After a year of kid's rides, SeaWorld Parks goes all in on big thrills in 2020 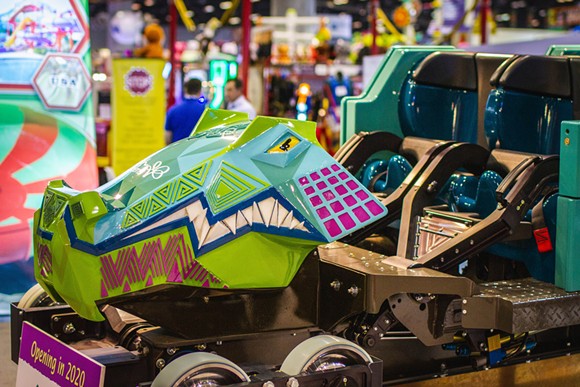 SeaWorld Parks kicked off the first day of the IAAPA Expo, the world’s largest amusement-industry convention, with a pair of press events on Tuesday, one for each of SeaWorld’s new planned attractions.

Unique to this year are the number of coasters and the variety of manufacturers making them. Each of the five coasters slated for 2020 is from a different builder.

After a day of press events, what’s clear is that SeaWorld’s biggest coaster, measured both by their degree of focus and by the number of fans to the press event, is Busch Gardens Tampa’s Iron Gwazi.

Idaho-based Rocky Mountain Construction, known for their intense redesign of wooden coasters, is taking the long-closed Gwazi dueling wooden coaster and is making it a record-breaking beast of a hybrid coaster. The new ride will be one of the tallest, steepest, and fastest hybrid coasters in the world. Gone are the lion and tiger theme, replaced by a gator. 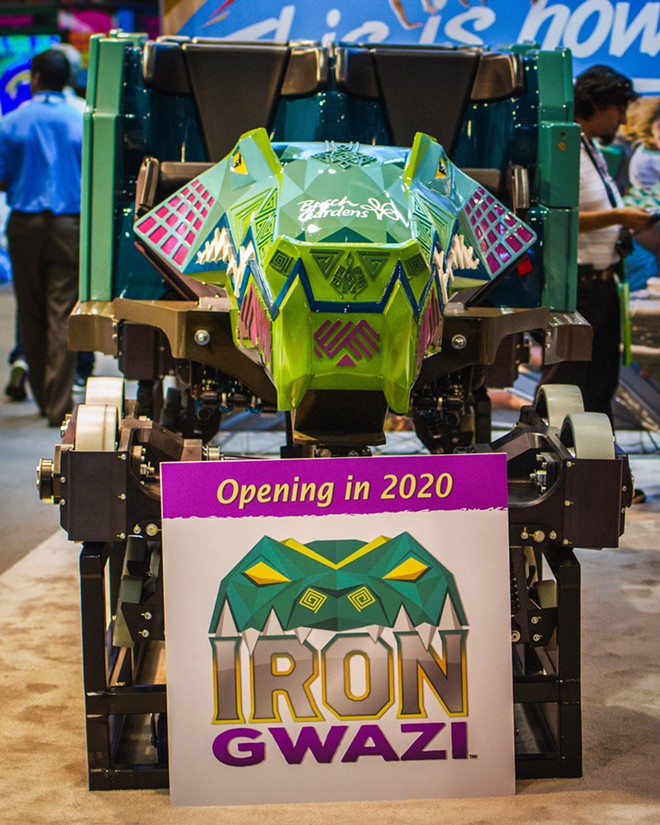 The ride vehicles have a jagged design reminiscent of the stealth-fighter-influenced Cadillacs that came out a few years ago. While the harsh, serrated design doesn’t look good on a luxury SUV, it looks quite sexy on a coaster. The small profile of the gator-themed ride vehicle means those in the front row will have impressive sight lines.

After the positive response to the ride design on Tuesday, expect to see Iron Gwazi’s gator-themed coaster cars heavily featured in Busch Gardens’ marketing for years to come. Rocky Mountain Construction promised that this will be the biggest thrills in the park and one of the most thrilling attractions they’ve ever built. With no mid-course brake run, Iron Gwazi will have far fewer trains than most coasters, meaning the wait times for this ride might also be some of the longest in the park.

Ironically, the next coaster up during SeaWorld’s big day of media events was a wooden rollercoaster, San Antonio’s Texas Stingray. It's expected to be the tallest and fastest wooden coaster in Texas,Iron Gwazi and is being designed and built by Great Coasters International. They created the original version of Gwazi. The Texas Stingray looks to be more of a family coaster, compared to Tampa’s, but with more than 15 airtime hills.

Busch Gardens Williamsburg will see a newly designed coaster car when its Pantheon coaster opens next year. With 180-foot drop and multiple launches, the new coaster by Intamin will be America's fastest multi-launch coaster.

It was revealed that SeaWorld San Diego’s new Bolliger & Mabillard dive coaster – previously rumored to be named Mako – will be named Emperor, named after the tall penguins known for their diving acrobatics. While not announced, previous rumors of an ersatz-Antarctica-themed area for San Diego now seem more likely with this new coaster’s theme.

Finally, many of the rumored details regarding SeaWorld Orlando’s upcoming Ice Breaker coaster by Premier Rides were confirmed. The quadruple-launch coaster will have the steepest beyond vertical drop in Florida and multiple airtime hills. A 93-foot-tall rear vertical spike with a 100 degree angle, the steepest beyond vertical drop, will help the launch coaster reach a top speed of 52 MPH.

The ride vehicles for Ice Breaker were unveiled at IAAPA and are already well under construction at the park. Using similar ride cars to their Sky Rocket II coasters (used on Tigris at Busch Gardens Tampa), Ice Breaker will keep much of the open-air thrill that Premier Rides are known for, but with an updated, albeit nearly identical-looking, restraint system, addressing one of the primary criticisms of the Sky Rocket II coasters.

One thing missing from the trade show this year was SeaWorld leadership. The past year has seen a dramatic departure of numerous high-ranking officials within the organization, including the previous CEO, who lasted only seven months. Both new CEO Sergio Rivera and assumed true captain at the helm – board chairman Scott Ross – seemed to be missing from the convention festivities.

It’s been less than two weeks since Rivera joined SeaWorld, so his absence from the announcements wasn’t surprising. But, as previously stated on here, it’s clear that while Rivera may have the CEO position, Ross is the one who seems to be genuinely calling the shots at the company. While Rivera might have new ideas on what to do at SeaWorld, Ross doesn’t seem interested in shifting away from the coaster focus he adopted when he began as board chair in July.

Also notably missing from SeaWorld’s slew of announcements this year was any mention of Sesame Street. A new Sesame Place park was confirmed for California earlier this year, but that park won’t open until 2021. 2020 will swap out the family fun of Sesame Street and instead focus on making each of the major SeaWorld parks even more of a thrill-ride destination park.

One thing missing from the trade show this year was SeaWorld leadership. tweet this
With another year of significant new coasters in the works for SeaWorld parks, it is clear that the company is focusing on the coaster wars fought between Cedar Fair and Six Flags for years. As massive coasters materialize at every single one of their primary parks, SeaWorld is banking on these larger, destination-style coasters to flood their parks with guests.