Orlando wants an MLB team, and we have a history of giving stadiums to rich guys 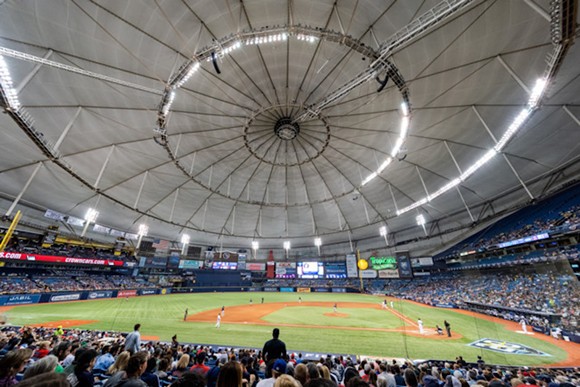 Pat Williams, Orlando Magic co-founder, held a press conference Wednesday morning discussing the possibility of bringing a baseball team to the city of Orlando. According to Williams, the proposed team would be called the “Orlando Dreamers,” a name he hasn’t given much, if any, background about.

What’s the likelihood that our local Rays will simply move across I-4 and head to the land owned by the rat? Well, it’s a lot better than that Montreal plan, which calls for the Rays to play the first half of their season in Tampa, then move to Montreal for the second half.

The MLB hasn't gotten very deep into the specifics of the plan (like, where the team would play in the postseason? Would the players get paid in Canadian or U.S. currency?), but the Rays are seeking two new, smaller stadiums to be built in both cities (because if Tampa wasn’t eager to pay for a stadium with the team playing all their games here, they’ll definitely go for half a season).

The Orlando Magic averages over 16,000 fans a game, and Orlando City soccer is in the top-ten for attendance in the MLS. tweet this
There’s also the problem of getting approval from the players’ union. If players aren’t already tired of being on the road for 81 games out of the year, they’ll be really excited to have an additional 40 road games (making for 121 road games, for those like me that are mathematically challenged). And with the Rays having the lowest payroll for players in all of baseball, clearly owner Stuart Sternberg is great about paying his players. So they’ll be very well compensated.

All of this is to say, Orlando is a much more viable option for the Rays.

For one, O-Town sports teams don’t seem to have the same attendance problems as the Rays. The basketball team, the Orlando Magic, averages over 16,000 fans a game, and the soccer team Orlando City is top 10 in the MLS for attendance, so who’s to say those fans wouldn’t want to watch Kevin Kiermaier go 0-5 with three groundouts to first and two strikeouts?

But arguably the best reason Sternberg might go for Orlando is that he may actually get his stadium. The City of Orlando would probably have to foot most of the bill, but this is something they’ve been more than willing to do in the past. Back in the early 2000s, the city did offer a massive chunk of downtown to convicted fraudster and boy band mogul Lou Pearlman for practically nothing. The City of Orlando also spent $8.2 million on land for their MLS stadium, and even approved another $20 million in tourist development tax funds to be deferred to the project. Plus, Robert DeVos convinced Orlando to spend millions on his new Amway Center back in 2007.

Sure, it’s a little far-fetched, but it is a possibility.

Especially if Tampa and St. Pete continue to shuffle their feet in regards to stadium funding. Plus, it already seems like Sternberg has one foot out the door. When asked at a press conference about the Montreal plan if he thinks a full season could work in either Tampa or St. Pete, he said, "I don't see it. I don't see it happening in St. Petersburg and I would be hard-pressed to see it in Tampa as well, given what I know."
Williams says that he called the MLB commissioner’s office with his proposed plan for having a team in Orlando, but he said he wants to find out how invested the community would be in the team before he does any serious work in planning for the team.

But it sure sounds like Orlando is more than ready for another big investment.