Florida dog puts car in reverse, drives in circles for an hour 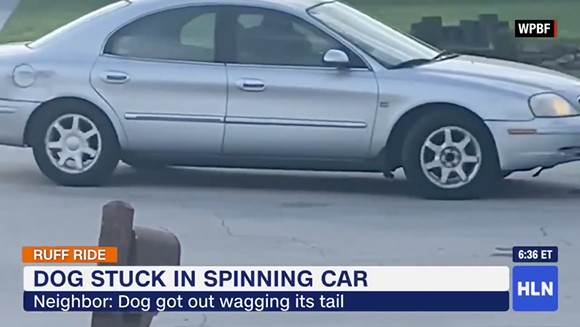 A black Labrador retriever named Max accidentally tossed its owner’s car into reverse, drove in circles for an hour, and smashed a neighbor's mailbox before the cops showed up.

According to CNN local affiliate WPBF, Port St. Lucie resident Anne Sabol says she wasn’t quite sure why someone was doing reverse doughnuts in her neighborhood cul-de-sac.

"At first I thought I saw somebody backing up, but then they kept going, and I'm like, 'OK, what're they doing?'” she told the station, which also reported that the dog appeared to be enjoying the drive.


A Florida dog put a car into reverse and drove it in circles for nearly an hour https://t.co/UrmKTDZCOh pic.twitter.com/MBWx4rXmLD
— CNN (@CNN) November 22, 2019


Soon enough the cops and the fire department showed up and monitored the canine joyride from a safe distance. After the lab hit a few trash cans and mailbox, the vehicle slowed down enough for authorities unlock the door using the driver’s side door keypad.

Apparently, the owner, who asked to remain anonymous, left his car running in the street and the dog somehow changed the gears.

Since the incident caused little damage and zero injuries, the dog arguably has a better driving record than most Florida residents.