Discovery could be the next big name in themed entertainment, but their Pointe Orlando pop-up shows they still have a long way to go

Last week, during the massive amusement industry-focused IAAPA Expo at the Orange County Convention Center, most of the attention was on the events happening at the Expo, including plenty of news regarding future attractions in Central Florida. One of the most unusual experiences was staged in an unassuming storefront at Pointe Orlando. The Discovery X Farbound Experience Center took over part of the former Hard Knocks location.

Farbound is a digital-focused, mixed-media design studio focused on immersive experiences. While some may not be familiar with Farbound's work, most are likely to recognize the work of parent company Rhetro & Co. Rhetro & Co., previously known as RHETROACTIVE (remember the all-caps trend?), has worked on dozens of high profile projects for clients like Merlin, the Georgia Aquarium, Premier Parks, and Universal Studios.

All the theme park sneak peeks we saw at the IAAPA Expo in Orlando
By Seth Kubersky
Blogs
After opening a Discovery branded adventure park in Moganshan, China three years ago, expectations have remained high on what the LA-based design firm will announce next for the partnership. In 2017, Parques Reunidos announced a chain of Discovery-branded family entertainment centers (FECs) across North America, Western Europe, and Asia-Pacific. Those plans now look less likely, as Parques Reunidos was bought out and taken private earlier this year.

Since 2017, very little news has come out of the partnership between Rhetro and Discovery. Last week's Pointe Orlando pop-up experience seems to show that, despite it now being years since the partnership first began, Rhetro & Co. still has a long way to go before Discovery becomes the big themed entertainment brand that many stated it might be when the partnership was first announced.

The mostly proof-of-concept style experience was open to the general public, but on opening night on Tuesday only a few dozen people showed up for the open bar cocktail event. Guests entered past a giant, Discovery Channel-style "D" photo-op and were checked in at the front desk that looked to be a holdover from the old Metropolis nightclub days. In fact, the space which most recently was a laser tag attraction still had many items that look to be leftover from former tenants, including a broken lock on the bathroom stall.

Two separate rooms each held promising concepts for how Rhetro & Co. and Farbound planned to harness the multi-channel Discovery brand for use in themed attractions.

On the walls throughout the space were posters with ideas on how Discovery’s brands could be used in various themed attractions. One wall showed a map of a new development in a Chinese rainforest, Discovery Hainan Island Resort, that will feature three hotels and multiple eco-focused attractions across a massive resort linked via a lagoon system. The Discovery branded resort is already in the works. Discovery has also been successful with current partnerships, most notably with Princess Cruises.

In one of the two concepts designed for the Pointe Orlando experience was supposed to be a projection-mapped escape room similar to ones that Farbound has developed for Princess Cruises. Projection mapping and other digital technologies are used in escape rooms allow for multiple themes, branching narratives, and smooth turnover between groups. The rooms sounded promising, but during the opening night at Pointe Orlando, the rooms weren’t working. 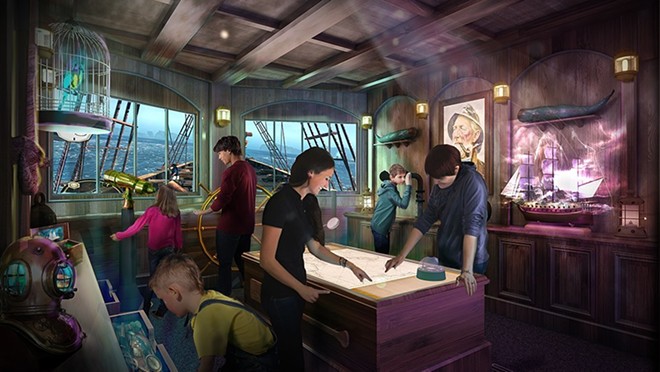 In the other room sat a dining experience straight out of Soylent Green. On one wall of the large room sat a mock-up with three projection walls surrounding a table with twelve seats. Groups of guests were let into the experience in small groups. After sitting down at the table, the projection walls began playing more b-roll from Discovery, all shot in 8K. The walls flashed with video of busy city streets, underwater animals, waves, views of space, and other wonders of life on earth. A short video caused the walls to look like the inside of a dining car on a train before revealing a waterfall framed by a lush jungle. During certain scenes, images were projected onto the table itself while subwoofers under it rumbled during some of the more impressive scenes.

The entire time the videos were playing, an individual from Rhetro & Co. stood nearby pitching ideas on how this dining experience could be realized: a Discovery-branded dining experience, two-hours long with fully immersive videos on the four walls surrounding the dining room. Since it's video-based, the concept could be changed out for each night of the week or for various holidays.

In the other room sat a dining experience straight out of Soylent Green. tweet this
Many guests at the opening night of the experience at Pointe Orlando seemed confused at what it was supposed to be or where they were supposed to go, and most of the staff at the pop-up were hired for the event with little knowledge of what it was.

What is clear, though, is Rhetro & Co. has snagged a massive deal with Discovery and together than plan to take on the highly themed, digital-based attraction that Orlando-based Falcon’s Creative Group has become known for. Falcon’s ushered in a new era of experiential attraction when it designed the National Geographic Ocean Odyssey attraction in New York. This digital-based ‘aquarium’ removes all of the ethical concerns and most of the technical matters that traditional aquariums face. Locally, SeaWorld, which is in the midst multi-year plan to focus more on experiences and less on animal habitats, turned to Falcon’s for one of their first digital-based attractions, Turtle Trek, for which Falcon’s still holds the licensing and is currently seeking new partners for installations.

It was one year ago this month that Falcon’s announced a partnership with PBS to design a chain of educational family entertainment centers. So far, that concept has yet to be realized. On the walls of Discovery X Farbound Experience hung concept art of a nearly identical Discovery branded family entertainment concept. Beside it hung an idea for a theme park based on Discovery’s various brands, not that different than the countless amusement parks previously announced by multiple design groups. The difference between those and the ones on display last week at Pointe Orlando is the massive library of intellectual properties and content that Discovery can offer.

The difference between these concepts and countless amusement parks previously announced is the content that Discovery can offer. tweet this
Many of the concepts also have a striking resemblance to newer midway attractions that Orlando-based Ripley’s has been developing. Known for their odditoriums, more recently, Ripley’s has been moving into themed aquariums, mini-golf, wax museums, and more. The difference between many of Ripley’s attractions, like their Louis Tussaud’s Wax Works and their Marvelous Mirror Mazes, struggle to gain the same name recognition that a brand like Discovery already has.

With more than 8,000 hours of original programming created every year, and dozens of channels running in more than 220 countries and territories (and in 50 languages), Discovery, Inc. is a juggernaut of real-life focused television. Some of the brands better known in the U.S. include HGTV, Food Network, TLC, Science Channel, Travel Channel, DIY Network, Animal Planet, Motortrend, OWN: Oprah Winfrey Network, the dodo, Eurosport, and NowThis.

While House Hunters - The Ride is likely not happening, Discovery has already seen success with some of their brands including MythBusters, which has its own educational exhibit that opened at the TELUS World of Science in Edmonton earlier this year, and an Animal Planet-branded exhibition Living Worlds, which opened last month at Singapore’s Edutainment Champion Science Centre. That exhibit seems heavily influenced by Falcon’s similar attraction in New York. Both of them point to a future of aquarium where technology replaces live animals, especially large mammals.

Rhetro & Co. seems to be looking to harness the name recognition of Discovery, building upon Discovery’s previously successful partnerships, to blow the brand out to be the next big name in themed entertainment via a full slate of shovel ready attractions, much like how Merlin has a full line of experiences, ranging from a simple wax museums to multi-day resorts. Gone are the live animals, the difficulty of name recognition, and the time required for creating original concept art every single time, all of which a prohibitively expensive for attraction operators.

If successful, Discovery, via Rhetro & Co., could present itself as a major competitor for multiple Orlando based companies, including Ripley, SeaWorld, and, especially, Falcon’s Creative Group. But if future pop-up experience and sales pitches are as rough as the one witnessed this past week, Orlando will have nothing to worry about.