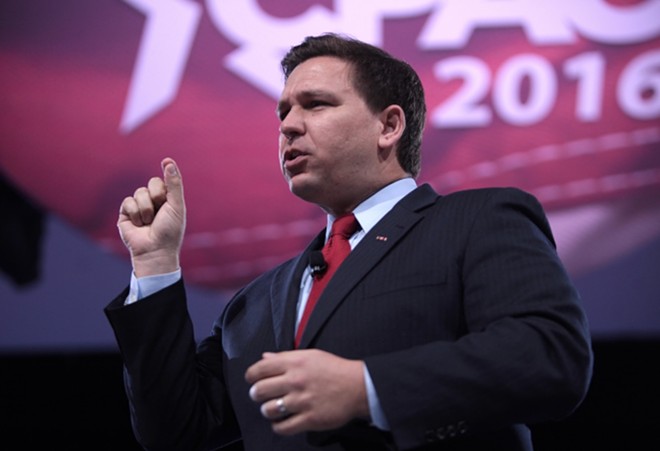 You know, negging: When a "pick-up artist" deliberately gives you a backhanded compliment to throw off your confidence. Or when you're hanging with the family for the first time in months and your grandma says something like, "You're so brave to wear your hair like that! I wish I had your confidence," which sounds kind of like a compliment until you realize 1) she sounds surprised and 2) does this mean your haircut has been discussed behind your back? (It does.)

Among other batshit things our increasingly demented prez said at last night's campaign rally in Sunrise, he opened by introducing DeSantis and musing, "I always thought Ron was a little bit heavy." (Inappropriate, Grandma!) Here's the whole cringe-inducing bit:

"One day I am with him and I pat him on the shoulder and I go, whoa! That’s strong. … That’s a lot of muscle there. My hand didn’t sink in like it does with a lot of people. And then I see him without a shirt one day, and this guy is strong. He’s not fat. That’s all power. That’s all muscle. I want to tell you that.


DeSantis' spokesperson later clarified that Trump has seen him without his jacket while golfing, but NOT without his shirt.

By the way, you should know that outfit makes you look dumpy even though you aren't. I'm just looking out for you!