Band of the Week: Syn Nine 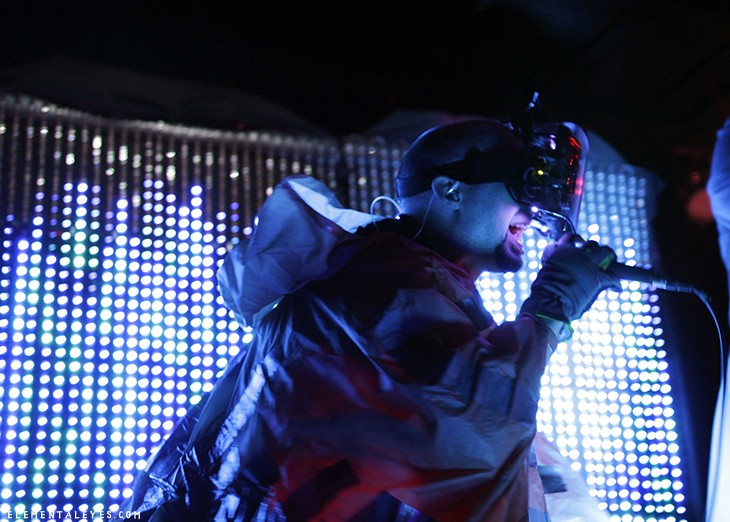 Welcome to Orlando Weekly's "Band of the Week." Every week, we highlight one of our favorite local bands. This week, we're pleased to bring you Syn Nine.

Syn Nine is playing a CD release show at Stonewall Bar on Dec. 6.

When did the band form?
We consider the formation of the band to be February 2017 in Jacksonville, FL. This is when DK and DJ Black had their first live performance together as Syn Nine at the Eclipse nightclub.

Currently available releases:
Our debut album will be available in physical CD and online streaming and distribution on/around December 6, 2019.

We have several videos on YouTube. Some key ones are:

What has been your most memorable show so far?
Our most memorable show so far was with Suicide Commando at The Orpheum, Tampa. DK had barely slept for four days while trying to finish building and programming a giant 12'x6' interactive LED wall for the show. We debuted it to one of our largest crowds yet and filmed the video for "We Are The Cyberpunks" at the show. The crowd sang and danced with us and we had an amazing time.

Which local band is your favorite one to play a show with?
I would say our friends Auditory Armory. Not only do they put on a fantastic show, their musicianship is top notch, and they’re some genuinely wonderful people.

What description gets used for your band that you would most
like to correct people on? Why?
I don’t think this one is applicable yet. We brand ourselves as Cyberpunk pretty heavily and people have been rolling with it.

What’s your favorite thing about being an Orlando band? Why?
We moved to Orlando last year from Jacksonville to be more central to the state and make traveling easier. Since being here we’ve found that the Dark Alternative (goth/industrial/post-punk/darkwave) scene is really alive here. There is Funhouse Friday, Panic, Crux, and Obscura Undead at Stonewall representing all facets of the scene, as well as Memento Mori at Independent Bar, and similar events at The Falcon. Moreover, there are countless great shows that tour through here.

Any big news to share?
We signed with Curtain Call Records a few months ago and they’ve helped us get booked for some huge festivals next year. We can’t announce them just yet, but we’re very much looking forward to seeing our fans around the US and hopefully Europe next year.

Outside of that, we make a lot of props for our shows. We made a video and build tutorial for a Cyberpunk facemask earlier this year that went viral. That was pretty exciting.

The Heard band of the week syn nine Video