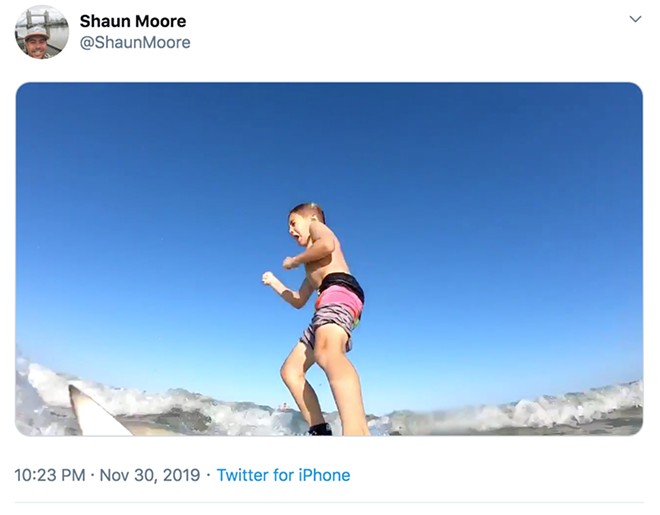 An Oviedo boy and his father visited New Smyrna Beach over Thanksgiving weekend to surf some holiday waves. That's where, according to WESH, in the waters of the Shark Bite Capital of the World, 9-year-old Chandler Moore surfed into a young blacktip shark.

Video from a camera mounted on the front of his surfboard captured the whole thing, and it was quickly picked up by national media.

Chandler, righteously cruising some surf, suddenly flinches at the sight of something swimming toward him head-on, fists clenched. Chandler aborts, jumping off his board. The shark wriggles over the board in the opposite direction.

@EricBurrisWESH Eric, some wild stuff happened to my son and I tonight at NSB! Check this out! pic.twitter.com/3Cn51rrdAS

Chandler is one very lucky badass. The weirdest thing about this story is that it doesn't happen more often.

Volusia County has more confirmed shark bites than any other place in the world, according to the University of Florida’s International Shark Attack File. From 1882-2018, Volusia County has had 303 shark attacks, besting second-place Brevard County, which had 147 confirmed bites during those same years. The two counties together form the entire Central Florida coastline on the Atlantic.

Just how dense are Volusia's waters with sharks? National Geographic cited UF's shark file data to estimate that anyone who has swam at New Smyrna Beach has been within 10 feet of a shark.

Still, people seem to give nary an F, and continue to go to hotspots like New Smyrna Beach, evidenced by a spike in tourism in Volusia County in 2018.

Chandler's dad Shaun posted the video to Twitter, where he added that the boy wasn't bothered because he didn't think it was a shark, but just another fish.

"We paddled out for more," he writes.