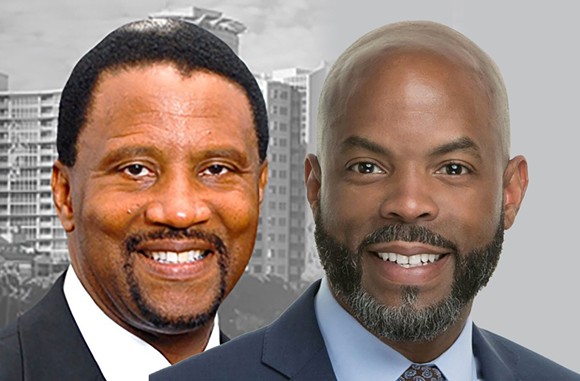 Today, Dec. 3, is the last day to vote in the runoff election to settle the last Orlando City Council seat. Polls close at 7 p.m.

The voters in primarily west-Orlando District 6 live in and around the neighborhoods of Holden Heights, Richmond Heights, International Drive, and the areas around Millenia and Universal Studios Resort.

None of the three candidates received the necessary 50-percent (plus one vote) during the Nov. 5 election, where Orlando Mayor Buddy Dyer was reelected with an overwhelming 71.8 percent of the vote.

The runoff will now decide between nonprofit executive Bakari Burns, who finished first with 1,532 votes, or 45.9 percent, and former state Sen. Gary Siplin who received 1,317, or 39.45 percent.

Longtime local business owner Lawanna Gelzer received 489 votes in November, or 14.65 percent. That means Gelzer's total number of votes more than doubles the 215-vote difference between Burns and Siplin. On Nov. 12, Gelzer announced that she endorsed Siplin in the runoff, making this an even more hotly contested race.

Check out our voter guide profiles of Burns and Siplin from before the Nov. 5 vote, as well as updated profiles ahead of today's runoff campaign. Check your registration and voting location at ocfelections.com.