Florida Rep. Matt Gaetz got pissy with an impeachment witness 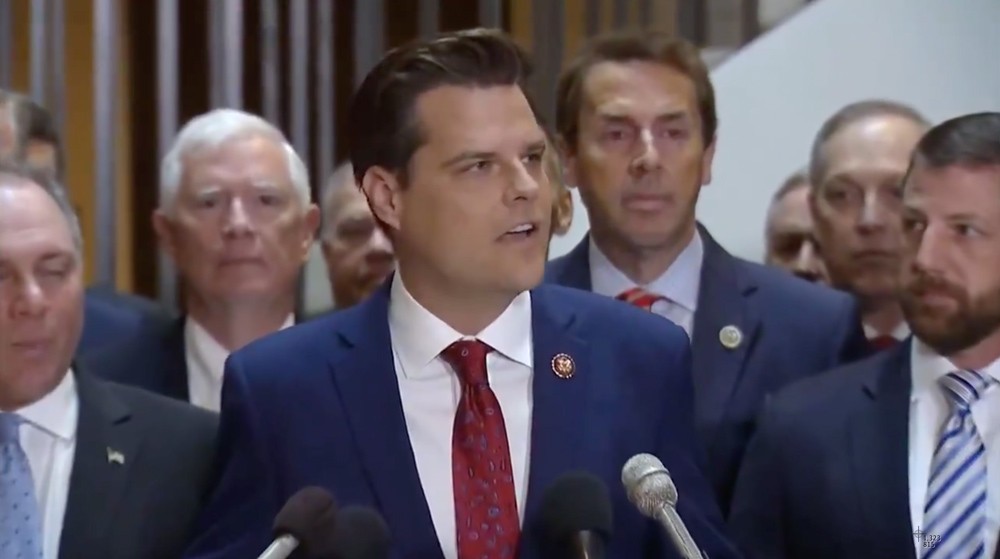 True to form, Gaetz jumped to action to defend Trump during the impeachment hearings on Wednesday. Also quite predictably, his showing was loud and pissy. Not in the scandalously Trumpian, pee-tape sense, but pissy in the classical, but also very Trumpian, sense of being a hardly coherent hissy.

An example is when Gaetz screamed at a guy outside the Broward Supervisor of Election's office after the Nov. 2018 election, saying that a request for a recount is the same as asking people to change their ballot, which is nonsense.

In the latest installment of Gaetz Being Loud, the congressman clashed with Stanford University of Law School professor Pamela Karlan, a witness called by Democrats for the House Judiciary Committee hearing Wednesday.
Gaetz asked if Karlan had donated to the campaigns of Democrats Elizabeth Warren, Barrack Obama and Hillary Clinton. Karlan, shruggingly, copped to all three donations, responding that she had given Warren's campaign $1,000, Obama's $1,200, and Hillary Clinton's $2,000.

"Why so much more for Hilary than the other two?" Gaetz says.

"Because I've been giving a lot of money to charity recently because of all the poor people in the United States," says Karlan, sensing Gaetz is on the super-offensive and deploying a bit of a counter jab.

Gaetz then asks if Karlan was on a podcast called "Versus Trump," a podcast about people taking measures to prevent certain Trump action. Karlan begins to attempt to explain that she was on a panel and not really the podcast.

But Gaetz cuts her off. We don't get the clarification. He begins to get louder and ruder. Gaetz asks Karlan if, on the podcast, she said liberals tend to "cluster" while conservatives spread out "because they don't even want to be around themselves."

"Did you say that?" asked Gaetz. Laughter is audible in the room.

"Do you understand how that reflects contempt on people who are conservative?" he asks.

Karlan says she does not hold contempt for conservatives and that, in context, her quote speaks to how redistricting and fuzzy guidelines like compactness requirements have the "natural tendency" to favor "a party whose voters are more spread out."

We know what Gaetz does when confronted with even the slightest nuance. He bypasses it and gets pissy.

"You may not see this from, you know, like the ivory towers of your law school," Gaetz revs up, rolling out his slam-dunk moment (Gaetz, an attorney, attended College of William & Mary, one of the most expensive law schools in the country). He says Karlan's analysis makes "actual Americans" feel bad.

Karlan tries to get a word in but Gaetz rebuffed her, barking back, "you don’t get to interrupt me on this time.”

We know what Gaetz does when confronted with even the slightest nuance. He bypasses it and gets pissy. click to tweet
He then goes right back to his scolding lecture of the Stanford lecturer, admonishing Karlan for a joke she said which referenced Trump's son 13-year-old Barron Trump.

Karlan mentioned Barron in a quip about how Trump acts as though his title bids him immunity like that of a king, even though he is not royalty. "And I'll just give you one example that shows you the difference between him and a king, which is the Constitution says there can be no titles of nobility, so while the president can name his son Barron, he cannot make him a baron."

This coming from a guy who said he likes being called a tool.

As long as Trump does things that need shameless defending, we'll be hearing more from Gaetz. 'Till next time on "Florida's Least Favorite But Very Loud Lawmaker."